Freeway Free in France: the other national cemeteries of Normandy

We are all familiar with pictures of the American Cemetery in Normandy, with its rows of white crosses stretching into the distance.  I had not known that the United States was the only combatant in World War II which offered families of its dead an option to repatriate their remains for burial in the US.  The nine thousand plus graves at the American Cemetery are only a third of the fallen.  These are those soldiers who had no family, or whose families lacked means or desire to hold funeral rites at home, so they preferred to let the government bury their dead.

Soldiers from other countries were buried near where they fell. There is a cemetery for Commonwealth soldiers in Bayeux, with tombstones rather than crosses.  There is a Canadian cemetery near Caen.  And, most ironically, there is a German cemetery. at LaCambe, also near Bayeux.

The German cemetery is quite different in look and feel from the rows of white marble favored by the victors.  One enters the cemetery through what seems like a large arch, but once inside, the spacious entrance gives onto a small room with a memorial wall on one side and a listing of the cemetery’s occupants on the other. Exit into the cemetery is through a narrow and low door.  The symbolism, we were told, is that the soldiers entered the war as a group, but died individually, one by one. 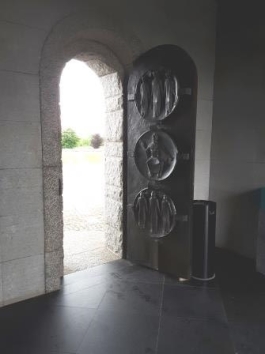 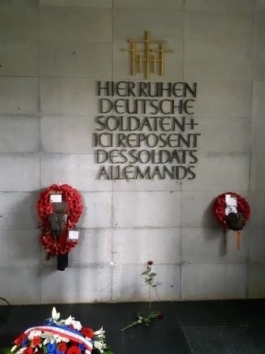 The central feature of the cemetery is a tumulus which contains the remains of mostly unidentified German soldiers, topped by a black lava cross and two human figures, one of Jesus, the other of Mary.  Scattered around the grounds are groups of black crosses, some slightly larger than others.  The individual graves are marked by brown plaques laid flat in the grass, each bearing the names of two German soldiers, with their dates of birth and death, and sometimes merely the inscription “Ein Deutcher Soldat”. The plaques are made of German clay. 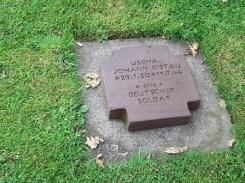 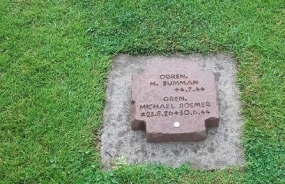 If I should die, think only this of me:
That there’s some corner of a foreign field
That is for ever England.
France has ceded the land which contains the World War II cemeteries to the respective nations which maintain them.  (Thus President Trump acted as host for ceremonies on D-Day at the American cemetery, arriving first and greeting French President Macon and his wife as guests.) It is sobering to realize that this corner of France will be forever Germany, peacefully coexisting in death with its former enemies. 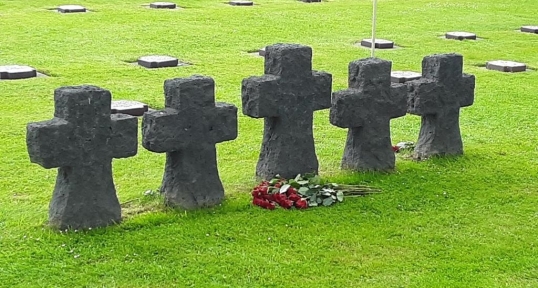