Archive for the tag “Women travelers”

Freeway-free in France: the Arches of Languedoc 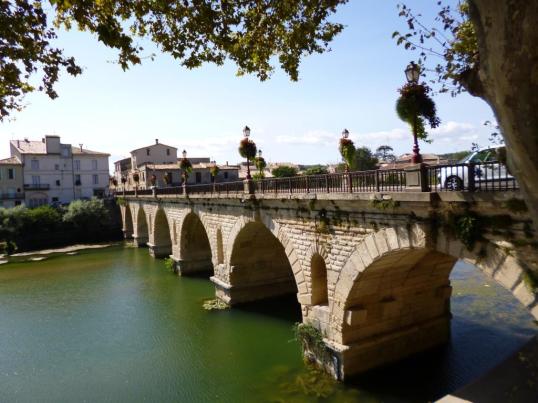 We began the day at 6:30 with an early light breakfast of coffee and fruit, then set out for a shortish hike to the old Roman bridge and assorted ruins at Ambusson. This bridge was famously painted by Courbet.  The old fort is nothing but ramparts and a few walls, but from its height one can see 360 degrees around Languedoc (that’s where we are, just across the border from Provence). Then we went to the musee, where we got to try on authentic Gallo-Roman couture, and see lots more pictures of the famous bridge in less and greater stages of deterioration over the centuries. 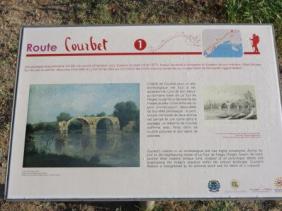 We came back for brunch a la Mediterranee. Lots of leftover quiche, three kinds of soft camembertish cheeses, delicious seedy whole wheat bread, lots of fruit.  Then to the medieval town of Sommiere, with another Roman bridge which is still used by cars and pedestrians to cross the river.  Six of its arches span the water; the other 11 are now land-locked. The river is herded into a narrower channel than in BC times, but periodically floods to its own old level, culverts and levies not withstanding, which means that there are lots of high water markers VERY high on the medieval walls. The old arches are now used for shop fronts and storage chambers along the medieval square.

By the time we had hiked up to the castle on the hill it was after noon and quite warm, so 0ur next stop was a glacier by the river, where there was shade, a pleasant breeze, and 10 flavors of gelato to choose from.  We watched the swans in the river and pondered thoughts of the old Romans who built so well. What would they think of their bridges now?

We had been told in the US that we could easily swap out the SIM cards in our phones for one which would give us cheap European internet, wireless, and phone capability.  We headed for the SFN store in the local Intermarche, where after over an hour of effort by the two very polite and patient clerks, it was clear that NONE of the five phones DM, WB and I had between us would accept data from the SFN SIM card.  Fortunately, I had received a “Welcome to Paris” phone text message from Verizon encouraging me to call if there was any problem, and both DB and I were soon  set up with $40/month international roaming data plans (which we could have easily set up in the US in advance, but thought the local SIM cards would be more flexible.)  WB opted for purchasing a cheap flip phone so she could make calls and text – it turned out having both types of service was very handy depending on what kind of coverage was available in which areas we traveled.

I’m in Boulder Colorado on my way to a women’s fitness camp in the Rockies. In principle I will return purged of toxins, physically toned, and mentally refreshed.  I may also be without internet connection (which might be mentally refreshing in itself, now I think of it.)

So hang on for my final blogs on Spain, with a focus on Madrid.