Freeway Free in Spain: Every Day a Festival 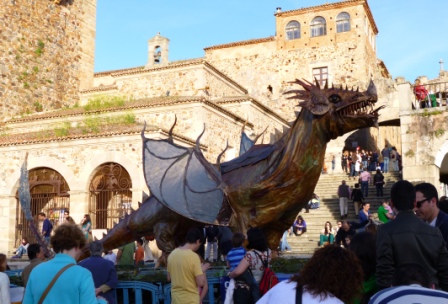 We happened to be in Caceras on St. George’s day. Great Britain’s favorite dragon-slayer is also the patron saint of Caceras, so, being Spain, a festival is called for. This one involves the making and parading of a large paper-mache dragon through the streets, accompanied by an army of costumed Moors (the dragon’s evil henchmen), their ladies in various ideas of harem dress, and a princess destined to be sacrificed. This group is pursued by a squadron of Christian knights sporting white tunics and red crusader crosses, followed by the hero, St. George, on his white horse ( a highly trained Andalusian paso, striking camera-friendly poses all down the street). When the parade reaches the Plaza Major, St. George defeats the Moorish leader in a swordfight, then plunges a blazing torch into the dragon’s heart. The dragon bursts into flames, and the princess, St. George, and his horse watch its demise from the battlements of the Old City, as ear-splitting fireworks and rockets illuminate the Plaza.

You can google “Caceres dragon” and get a pretty good idea of the festivities – videos from this year may be posted soon but don’t bother to look for me. We are way back under the arcades opposite the guys juggling torches.

The dragon-burning was fun. W and I were mostly surrounded by tall people and people with kids on their shoulders, but we did get a good view of St. George as he waited in the wings on his white horse behind the fire engines (can’t be too careful around a fire-breathing dragon!), and during the subsequent sections the main action was projected on the castle walls so all could see. After the dragon was lit and St. George and his horse had taken their bows everyone headed for the exits at once. We stopped for a helado once we were free of the crowd and ambled back to the hotel alternately looking upward at the  fireworks visible between the buildings on the narrow streets and looking downward at our ice cream. 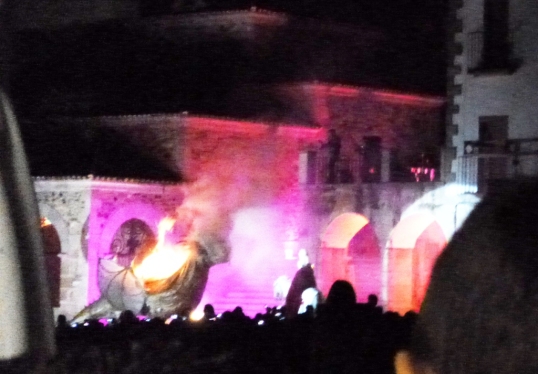 Can you spot St. George on his white horse gloating from the balcony?

Freeway-Free in Spain: Around and About in Extremadura 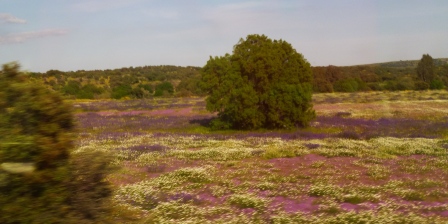 As an American, I thought the whole North/South thing was a side – effect of our 150-year-old civil war, but it seems to be a global prejudice.  Whether it’s a Tuscan speaking of Sicily, or a Parisian of Provence, or a New Yorker speaking of anywhere south of the Mason-Dixon line, the general thread is “Oh, those southerners!  They live at such a slow pace!  They are lazy!  And their accents – you can barely understand them!” This also is what the Spaniards of Castile y Leon or Catalonia say about Extremadura, maybe one of the most fascinating places you have never heard of.

“Extremadura” simply means “beyond the Madura River”.  It takes in the broad plains and mountain ridges between Madrid and the Portuguese border. The province is ringed by mountains, so during the Peninsular Wars Wellington’s troops swung north, leaving the medieval fortress walls of Caceras and Trujillo and the  Roman ruins of Merida unscathed. If you dream of going back in time, in Extremadura you can almost pick your century.

The bus ride from Madrid  to Caceras, the center of Extremadura, takes a little over four hours with one half-hour and one five-minute stop.  After an unusually wet spring  it was a lovely ride, with the snowcapped peaks of the Sierra de Gredos rising above the rolling green plains of La Mancha, – only missing some windmills to tilt at.  As we moved into Extremadura the landscape looked more and more like spring in California’s Sierra foothills  – pools of blue flowers that weren’t lupine, shrubs covered with big white flowers that weren’t matilja poppies, recognizable Scotch broom and mustard and unrecognizable pink and lavender flowers, all  painting the slopes beautiful. 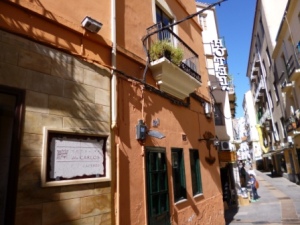 Our home base for the week is the Hotel Don Carlos, just off the Plaza Mayor (Main Square) and steps from the medieval Old City which earned Caceras its World Heritage Site designation.  Our first two nights were spent in a spacious room with a luxurious bath,  facing the narrow cobbled pedestrians-only street, with a cute balcony and view down the twisting lane to the restaurant on the corner.  The first night we slept as befits travelers who have been on the road for twenty hours.  The second night we slept as befits those whose open window is just down the street from a bar patronized by soccer fans who are cheering, drinking, and arguing raucously until at least 4AM.  We asked for a change, which happened seamlessly while we were out sight-seeing.  The following nights were spent in a smaller room facing the inside courtyard, with no balcony or bidet but lots of blessed quiet.

Note to travelers in Spain:  The American work schedule has not penetrated past the Pyrenees.  Spaniards snack at 8 AM, take a two hour lunch break 12-2PM, work til 7PM, hang out on the Plaza until at least 9PM, maybe think about dinner after 9PM, and after dinner hang out some more.  Don’t even think about looking for dinner before 9PM.

On our first evening we walked through the neighboring church plaza spotting storks nesting on the church steeple, swallow chicks chirping in the nests built in cracks in the church facade, swallows swooping and dodging after gnats to feed to the chirping chicks, and lots of folks of various sizes, shapes, and colors strolling, sipping, socializing in the empty open walking and sitting spaces. 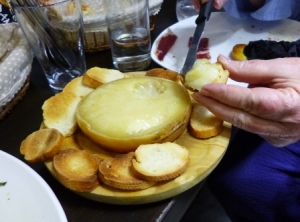 The helpful desk clerk had recommended a tapas bar just beyond the church plaza.  Not being accustomed to Spanish hours, we were the first customers.  We  asked for three of the four featured tapas and got enough food to feed four people comfortably, including the best anchovies either of us had ever eaten or imagined, assorted wonderful local cured pork, and a local soft cheese whose deliciousness defies description.   A walk around the Plaza Major shook down enough space within to make room for   a tiny cup of exotically flavored gelato after the post-tapas stroll.

It was 10PM and the Plaza was just getting going, but the lure of a warm shower and a soft bed has us postponing our adjustment to Spanish time for one more day.

Next: Medieval Meandering in Caceras

Castles in Spain – My childhood friend  W mentioned that she was planning to make a trip to the area in Spain from which emigrated some of the families she had known during her Peace Corps service in Peru. She thought maybe she would stay an extra week in Madrid to see the art museums.  Naturally, I invited myself to come along.

My contribution to the trip was a further extension of a third week to accommodate a visit to my niece J who lives with her Spanish husband and two children in a smallish town in northern Spain. We planned to travel mostly by bus and train, except for the visit to the smallish town, where we would need to rent a car – something I had never done in all my foreign travel. 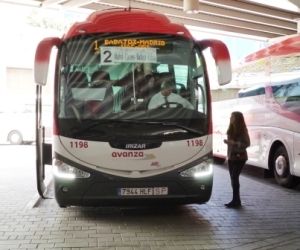 Smart thing I did:  Hang my plane tickets and passport in an easy access pouch around my neck, so they were visibly THERE at all times and easy to get to even though I was using carry-on luggage.

Dumb thing I did: Omit the last-minute-before-you-leave-the-house check for all necessary documents. Thus I failed to notice that my wallet-on-a-string had snagged itself on a towel bar in the kitchen as I zoomed past and had been pulled out of my fanny pack. Panic in the car on the way to the airport.  Go home? Risk missing the plane? Decision to rely on W for credit and ATM for a few days, assuming Capable Husband could find and FEDEX the missing wallet.

Smart thing we did: Book our first full week staying in one hotel central to Extremedura, so we could settle in – and the wallet could catch up with me (which it did, a day earlier than I had thought possible. Blessings on CH and FEDEX!)

Eighteen hours after leaving my house, via car, plane, subway, bus, and taxi, W and I arrived in Caceras, equipped with two Kindles, an iPad, a MacBook, and a cheap cell phone purchased at the bus station for making calls to my niece.  We were to become very attached to this phone.