Archive for the tag “Kathmandu airports”

Tips for Travelers – Do as I Say, Not as I Do

During this day’s transition from Kathmandu, Nepal to Chiang Mai, Thailand, DM and I broke every rule of the experienced traveler, including:

1.  Allow plenty of extra time to get to the airport in case of traffic.

“Oh, that’s silly,” says DM. “It’s only a 20 minute ride to the airport – make it 11:AM.” I didn’t feel like arguing, and also refrained from saying “I told you so” when the taxi arrived 20 minutes late, and traffic was horrendous.

2.  Besure to check that you have all your belongings before leaving the hotel.

Three blocks into the noon-time traffic of Kathmandu, DM shrieks “Oh No! I left my purse on the couch in the hotel lobby – we have to go back.” Fortunately, the taxi driver knew a back street, and the purse was still there.  And even more fortunately, the plane was a bit late.

3.  Be sure to check the rules about currency exchange if you have any significant amount of local currency left.

I had about $70 US in Nepalese rupees, which I decided in our hurry not to pause to exchange at the airport in Nepal.  It was only when I got to the US and tried to exchange that I found out that it is “illegal” to take NPR out of Nepal, and no other country will exchange the currency.

4.  Be sure to check that you have all your belongings before leaving the plane.

I stepped aside to check  the connecting flight number as we waited to exit the plane;  only after we were halfway up the concourse (fortunately, still within the security area) did I realize my backpack was too light – I had left my fanny pack/purse on the airplane seat.   I swam upstream against the flood of exiting passengers to retrieve it, and we loped through the concourse to catch our flight rather than making our anticipated R&R stop in the Thai Airways Orchid Lounge.

5.  Be sure you have some local currency in hand on arriving in a new country.

We had planned to grab some Thai currency in the Bangkok airport, but had no time between flights due to flight delay and my brain-dead episode.  By the time we arrived in Chiang Mai, the ATMs and currency exchange booths were shut down for the night.  Fortunately, DM’s neighbor had given her a few leftover baht to use as mad money – just enough to pay the taxi to our hotel.

So yes, we knew better.  God watches over fools.  We got there anyway.

Kathmandu – Day 7 – the Kathmandu Domestic Air Terminal – and back

Kathmandu International Airport is modest, particularly in comparison with its glittering neighbor, Suvarnabhumi International Airport  in Bangkok.  It has a small traffic control tower, a simple customs process,  a short walk through the terminal to the taxi queue, a nicely landscaped divided entry highway which leads into town a reasonable distance away. It reminds me of the Oakland CA airport in the 60’s from which charter flights through to Europe through Iceland – competent and manageable.

So my arrival in Kathmandu through this gateway did not prepare me for my attempted departure through the Kathmandu DOMESTIC Airport, which was much more reminiscent  of  Oakland’s Greyhound bus terminal before anti-smoking ordinances were in effect, assuming that tule fogs had shut down all routes south and stranded five busloads of would-be travelers. 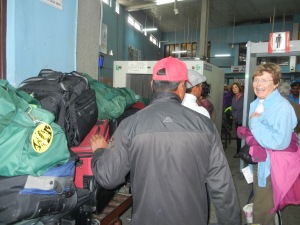 There is no such thing as curb-side check-in at the KDA – and if, like our group, you have several weeks worth of baggage, you would do well to tip your taxi driver or one of the unofficial airport porters to assist you to carry your bags.   You will need to pay an airport fee of about 200 Nepalese xxx and be able to show your receipt at the security gate.  You will be responsible yourself for getting your bags into the airport, labeled for your destination, and onto the conveyor belt at the security gate for X-raying. Then you will step through the security portal (Note that “Gents” go through a different portal than “Ladies”, in case you need to be patted down) and must then make sure your bags get into the proper pile to be loaded onto the airplane.

If there is fog, there will likely be several plane-loads of travellers waiting to embark.  Seating is limited and the benches appear also to have been handed down from a Central California bus terminal; their chrome armrests and cracked vinyl reek of authenticity, if not more.

If you are flying from Kathmandu to Pokhara-  the jumping off point for most treks on the Annapurna circuit – there are a few constraints.  The first and most important is that the Pokhara airport has no radar capability, so if the area is fogged in, it is not possible to land an airplane.  Also, it is not possible to land a plane after dark, as Pokhara electric service is limited.   Between October 15 and November 15 there is usually clear weather, so this is the peak season for trekking and for flying.  But if there is fog you will wait for it to lift – as we did.

Many of the waiting travellers will be smoking, as there is no such thing as smoking restriction in public areas in Nepal.  No, wait!  There IS a N0 Smoking sign in one area – and there are seats!  Uh oh!  it is the area next to the two public lavatories.  That’s why there are seats – the reek of the lavatories is perhaps less injurious to your health than the cigarette smoke, but it doesn’t make much difference, as there is nothing except the small sign preventing the smoke from the smoking section to invade the sacrosanct area.

There is a small snack bar offering candy, crackers, chips, soda, water, a limited selecton of souvenirs, and a very limited menu of hot sandwiches or rice bowls.  Since the flight to Pokhara will lasts less than an hour, you may forego these treats. Or if you find yourself waiting through lunchtime, as we did, you may give in.

I would like to be able to tell you about the boarding process, about the state of the Yeti Airlines plane we were to fly on, and about the Pokhara Airport, but unfortunately, you will have to learn about these from another, more fortunate traveler.  After SIX HOURS of waiting,  at 2:50 the nice young thing at the counter confided in DB ” We can’t fly after 4 PM because there are no lights at Pokhara, so the flight will be announced cancelled at 3.  Go quickly and get in line to re-book your flight and reclaim your luggage.”

So the three of us jumped into action – DB managed the baggage, I hit the Airport tax counter for a refund for the three of us, and DM stood in line to rebook.  DM also located the free phone and had a business card for our hotel, so we were able to secure our room again.

So now what?  We were  exhausted – 7 hours of airport noise and announcements and babble bracketed by unbelievable traffic and brown air, and no assurance that we would not have to go through it again the next day.  Stay tuned for Day 8!

Tip for travelers in Nepal – make sure to arm yourself with plenty of baksheesh  in the local currency before embarking – we needed an extra trip to the ATM after our experiences.