Just finished with Thanksgiving, just starting to get my mind set for upcoming Christmas, so it’s no wonder I’ve been mindful of traditions.

In my family, Thanksgiving has always been a holiday of hospitality, with assorted family members from near and far, old friends and some new ones, significant others and random dorm-mates, all sharing around a table or two or even three.  Over several generations, some of our traditions have morphed or been abandoned, while other new ones have been added.

When I was a girl it was my job to polish the silver in anticipation of any holiday gathering.  My mother would bring out her wedding silver, together with silver plated serving platters, a gravy boat, and covered casseroles, all needing considerable elbow grease to bring them up to her sparkling standard.  I was also in charge of making place cards and arranging the seating, preferably alternating men and women with no one from the same family sitting next to each other.  Later I became the hostess, and my granddaughter took over polishing my wedding silver as needed, as well as making and arranging place cards.

Growing up we always shared Thanksgiving with another family we had known since I was a toddler.  They always brought candied yams in a casserole and a couple of kinds of pies.  Decades later those friends had passed on, but meanwhile I have secured a husband who is a master hand at mashed potatoes, and my brother-in- law prides himself on pies.  No chance of a carbohydrate shortage here!

After Thanksgiving dinner had been cleared, we would set up the table for a game of Michigan (aka “Tripoli” in some circles) using a game cloth that had been hand-stenciled by my grandmother, and some poker chips which were as old.  This game depends mostly on luck and can be played by anyone old enough or young enough to hold a fan of playing cards.  My mother took delight in cheating, and we all took even more delight in catching her at it.

More recently, my husband added a tradition of offering champagne or sparkling cider to all before sitting down to eat, together with an obligatory group sing of “Over the River and Through the Woods” to the faltering accompaniment of my recorder.  (Having drunk a glass of champagne in advance helps everyone to participate with gusto).  The wearing of pilgrim hats or other costume items is optional for this performance, which  is a great ice-breaker for any of the new significant others or recently met friends. 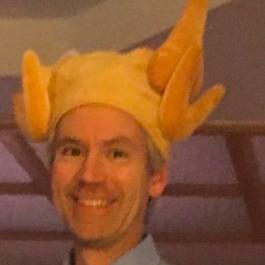 All great traditions.  But this Thanksgiving our minds were also aware of the wildfire victims who had lost so much of their traditions to inferno, and the migrants at our southern borders and  around the world who had abandoned their traditions in hope of finding a new home free of hunger and fear.

I thought a lot about the American tradition which has seen our country as “a nation of immigrants” , as “a melting pot”, as “a shining city on a hill.”  I remember the poem which I memorized for school as a girl,  inscribed on the base of the Statue of Liberty:

Bring me your tired, your poor
Your huddled masses yearning to breathe free.
Bring these, the homeless, tempest-tossed, to me.
I lift my lamp beside the golden door.

This is a tradition of hospitality that is more difficult to stick with in challenging times, but more important than turkey, more American than apple and pumpkin pie.  As a nation I hope we can live up to this traditional vision of our best selves.

Freeway Free in New Orleans: All that Tourist Stuff

You recognize this photo of the Cathedral Square in the French Quarter of New Orleans.  It could almost be a postcard if the cars would get out of the way and the sky be a bit bluer.  It was a warm day in May, and I was glad of the clouds.

You recognize these wrought – iron balconies in the French Quarter too.  A walking tour of the area between the Square and Bourbon Street has countless examples of this lovely lace work

.Of course, New Orleans means music.  We saw ragamuffins playing on washtubs, we saw street corner quartets, we sat on hard benches enthralled by the Preservation Hall Jazz Band, we were escorted to our restaurant by a second-line band.  Music is all over the French Quarter, and it’s all great!

And don’t neglect the simple pleasures of walking around the Quarter, peeking into garden courtyards, stumbling across artwork tucked away at the end of arched corridors, and gawking at window displays. Take your time.  New Orleans is a city for leisure – it’s too hot and humid to hurry! 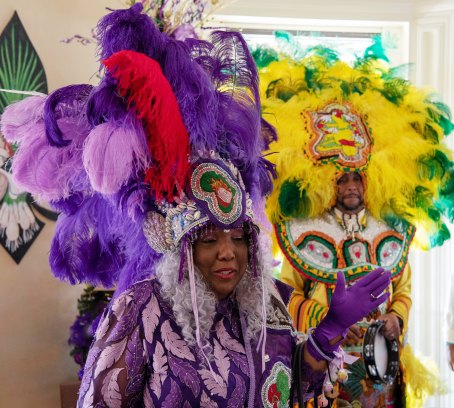 Hidden treasures: If you need an air-conditioned break, there are two fine exhibits tucked into the building just to the right of the cathedral as you face away from the square.  One details the how’s and why’s and consequences of Hurricane Katrina;  upstairs is a museum of Mardi Gras costumes.  Talk about contrast!

Why, I wondered, is the National World War II Museum in New Orleans, rather then in one of the principal embarkation cities for the European or Pacific fronts? 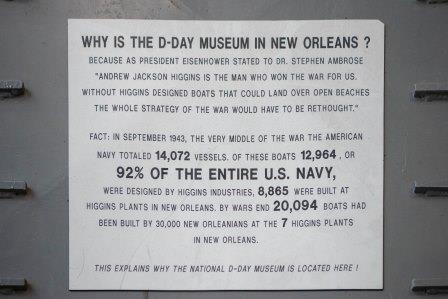 I guess I was not the only visitor with this question in my mind, as the neighboring plaque explains how A.J. Higgins’ design for landing boats “won the war for us” per Eisenhower, leading to the establishment of a D-Day museum in New Orleans, site of four Higgins plants.  Once the D-Day museum was established, widening its scope to include the rest of the war seemed sensible and cost-saving.  And the National World War II Museum is a true gem.

The main museum is divided into two major sections, one devoted to the European theatre, the other to the Pacific war. The exhibits include photos, little-seen films, recordings of memories from actual participants in the various political and military battles. I spent most of my time in the “Road to Berlin” section, while my partner skimmed through that to explore the Battle of Midway.   I also toured the exhibit adjacent to the lobby which covers the Home Front,  with dueling radio broadcasts from national hero Charles Lindbergh, the most prominent of the isolationists,  and Franklin Roosevelt advocating support of the British through Lend-Lease for Liberty.  Then Pearl Harbor settled it all. 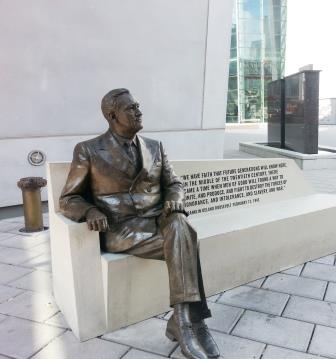 An excellent introductory film, “Beyond All Boundaries” shows in the Victory Theater Complex, which also offers live entertainment in vintage 1940’s style. the film orients you to what was at stake in World War II and how the conflict developed.  Even with this as a guide, there is too much to cover in one day.  The Home Front section includes a 40’s era -themed Soda Shop where a visitor can sit down and refuel.

Other buildings include the Boeing Center which displays WWII era airplanes, and a Restoration Pavilion which features displays on the technology advancements that came about under the pressure of war.

The National WWII Museum is a far cry from Mardi Gras, the French Quarter, and Cajun cuisine.  But it’s a Don’t Miss!