Visiting Scottsdale had not been high on my list.  After all, I grew up only an hour from Carmel, the West Coast apogee of artsy quaintness-by-the-sea.  What was Scottsdale with its art galleries but Carmel with cactus instead of ocean?  As usual, once I had visited, I knew once again how wrong preconceptions can be. Scottsdale is to Carmel as meaty BBQ ribs are to seared sea scallops – both wonderful, but incomparable.

We visited on a Sunday morning, so the galleries along the Art Walk were closed.  We were more relieved than disappointed:  the galleries would have seduced us into dallying inside, while on a temperate and sunny morning there was plenty to see in the sculptures that lined the sidewalk and rose from the median. At first I noted the proliferation of horses frozen in wood, ceramic, steel, and bronze, galloping, rearing, bareback in herds or straddled by cowboys, cowgirls, or the Original Inhabitants. [Note:  We met several locals with red-brown skin and aquiline noses, who told us to “Relax.  We call ourselves Indians.  It’s easier.”  I will follow this advice hereon.]  But there were also bronze children, artists, and unmounted Indian maidens both nude and clothed.  Also  various vaguely humanoid shapes, and a giant green head which might have been Buddha.

We left the Art Walk and meandered toward the center of town, a meander made easy by a grass-lined pathway going beside and over a dry creek and eventually leading us to the central plaza, bordered by the City Hall, Art Museum, and Performing Arts Center, all impressive and interestingly designed modern buildings.  The plaza was full of activity:  a craft fair was just setting up, with tents offering Indian artifacts, jewelry, clothing, and food.  A stage at one end promised music to come, and some families were already staking a claim with blankets on the sloping lawn in front of the bandstand.  And at the other side of the plaza I found an old friend, one I had first met in Philadelphia, then encountered again in Tokyo and Taipei.  I was delighted to see again Robert Indiana’s famous LOVE sculpture.

On the way back to our car we walked through Old Town Scottsdale, and found the tourist gift shops beginning to open.  I bought a silver-and-turquoise earcuff to replace a much nicer one I had been given and lost years ago, hoping to combine old and new memories. 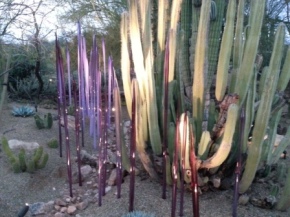 I thought of Phoenix as an airport stop on our way to hiking in the red rock country, but my friend B was more curious.  “Let’s stay a day in Phoenix and explore!”  So M, our travel organizer, found an affordable motel in Scottsdale. (“There are art galleries!  Let’s stay close!” B enthused.) We raided the local AAA for maps and guides, and off we went.

M was arriving first, so she rented the car. All the car rental offices for the Phoenix Airport are combined in a single large building at the edge of the airport, along with a food court, rest rooms, and a travel office – an amazingly good idea! B and I had flight delays, so we connected with M too late to do the auto tour we had planned for the afternoon.  But there was still time to walk in the Phoenix Botanical Garden, which was featuring an outdoor exhibit of glassware by the well-known artist/craftsman Dale Chihuly.

The Chihuly glass exhibit blended beautifully with the otherworldly colors and shapes of the cacti and succulents which are the backbone of the PBG, and glowed against a stormy evening sky. We strolled and pointed and admired as  lightning flashed, thunder crashed, and then came the deluge. We were close to the gift shop by then, which exhibited an amazing collection of small Chihuly pieces, also beautifully illuminated. (see below)   We  waited out the worst of the rain, then strolled a bit further armed with umbrellas. But soon there were too many puddles, too many  flooded paths, and we took refuge again, this time at Gertrude’s, the charming modern restaurant adjacent to the Garden. The tables were full of other soggy visitors, so we snuggled up to the bar watching mysterious cocktails being mixed as we sipped our staid beer and wine and downed excellent sandwiches.  I can recommend the pulled pork sandwich with chili dipping sauce, paired with a Mexica Model Negro beer.

The exhibit continues until May 18th (2014) so you still have time.  Evening viewing is wonderful.