Freeway Free in Memphis: The Peabody Hotel makes Duck Soup out of Ducks 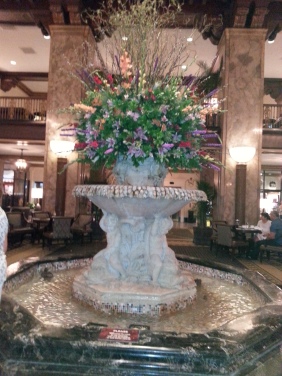 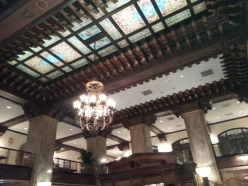 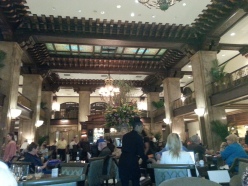 So many cities have at least one venerable hotel, a historic landmark, often with an upholstered  concierge’s retreat, an elaborate stained glass lobby ceiling, ornate balconies crafted of dark wood, maybe a fountain in the middle of the lobby, and shoeshine stand near the men’s room. BUT the classic hotels are lacking some of the amenities now considered obligatory: no exercise room, no pool with adjacent spa, no escalators between floors.  And that spacious lobby becomes an expensive liability if it can’t be filled with paying customers of the bar, tea room, and restaurant services.

Sometimes a hotel gets lucky.  For example, in San Francisco the venerable St. Francis Hotel was and is a traditional meeting place for families and friends after a day of shopping in the city for the wives, and business meetings for the husbands.   The St. Francis’s slogan is “Meet me under the Clock”, a reference to a huge grandfather-style clock that has graced the lobby through many updates and remodelings. And once you have met under the clock, it is natural to take  a seat at the adjacent bar for an end-of-day aperitif for the grownups and a Shirley Temple for the kids.

The Peabody Hotel in Memphis has no clock.  But it does have a fountain, and in the fountain there are ducks.   Why ducks? you may well ask.  It seems that some decades ago the proprietor of the hotel and his drinking buddies got a bit inebriated and decided it would be a fine joke to put some live ducks in the fountain in the hotel lobby.  To their surprise and bemusement, the ducks got lots of attention, including radio and newspaper coverage, and generated a lot of foot traffic as folks came in to see the web-footed invaders.  No fool, the proprietor made the ducks a permanent feature.

Now the ducks have become a mini-merchandising empire.  A red carpet stretches from the elevator to the fountain, and at 11 Am the duckmaster (in red jacket with gold braid) places carpeted steps against the fountain and escorts the ducks (who spend their off time in a spacious coop on the roof) to their fountain exercise pool  The balconies are groaning with tourists taking pictures of the ducks.  Many of these tourists will end up having lunch at the Peabody.

At 5PM the ceremony is reversed, as the ducks are herded out of the fountain and back into the elevator, again with a throng of fans watching, and likely sticking around for a cup of tea or a drink in the lobby lounge.

And if watching the feathery family parade is not enough for you, you can purchase a ducky souvenir at the hotel gift shop: rubber ducks of all descriptions to float in your bathtup, duck-shaped soap, duck-handled umbrellas, duck-embroidered hand towels, duck-billed hoodies, duck-stamped wallets, plus the usual key chains, post cards, snow globes, and so on.

All because a few guys got silly on a Saturday night.

Some folks probably only visit’s Houston’s main library because you can get validated free parking in the library garage by making a visit to its downstairs lobby.  They miss a lot.

On my recent trip, I was attracted by the garden and wrought iron fence surrounding the OLD library building (now known as the Julia Ideson Building, located right next to the new concrete edifice which supplanted it. )Once in the garden, I had to take a look at the historic building’s insides.  And as often happens in old libraries (I am somewhat of a library junkie) I found hidden treasures.

In the downstairs lobby was an extensive exhibit of original letters and news articles in glass showcases, chronicling the struggle of Houston’s black population to gain entrance to the city’s libraries. It was fascinating and chilling to see how earnestly, politely, and stubbornly the black citizens of Houston staked their claim to equal access to the libraries their taxes helped pay for, and how circuitously, hypocritically, and stubbornly the city and the education system of 1920’s-40’s Houston resisted their claim. (Houston’s black populations did not have equal access to the libraries until the 1950’s, under pressure from returning black veterans and the Eisenhower administration.)

Upstairs we found a beautiful painted ceiling and plaster-relief fresco above the wood-paneled walls.  Off one side of the vaulted second floor landing was a wonderful old reading room, presided over by Venus de Milo herself.

And behind an updated glass door was another exhibit, featuring the first black student to enroll in a major university in the South, John S. Chase. He was an architecture student, and there was no black college in Texas where the university system could pretend to offer him a “separate but equal” education.  Despite many obstacles (e.g. Texas regulations had to be waived to allow him to get an architect’s license without having served an internship, as no architectural firm would hire him) Chase went on to become a successful architect and mentor to a generation of successors.

On our way to the ladies’ room, we spotted a door at the end of the corridor marked “Authorized Researchers Only” . Of course we considered ourselves authorized researchers, and went in. Behind the oak doors was the original  children’s room of the old library, with its age-darkened bookshelves crammed with the children’s books which were too old, too little in demand, too overtly racist, or for some other inscrutable reason were deemed unsuitable for general circulation in today’s Houston Library network.

Of course, many of these books were very familiar to W and I and some had been much loved (Robert Lawson’s Smeller Martin and Elizabeth Coatsworth’s The White Horse were two I remember well and paged through once more with great glee, despite their racist stereotypes).  It was an Ali Baba’s cave to booklovers.

If you are in Houston with some hours to while away (I’m thinking maybe a rainy day, of which there are many) this would be a wonderful way to while. 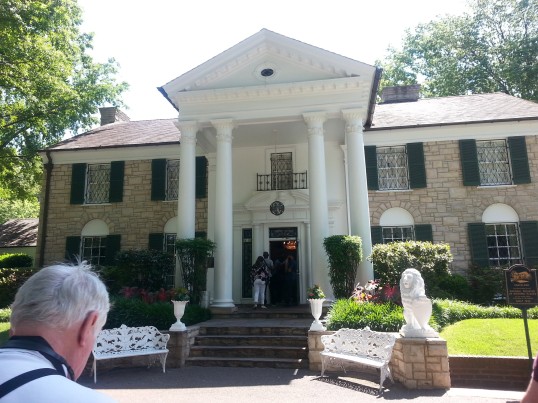 The first record I ever bought (and I still have it) was Elvis Presley’s debut album, “Elvis”. So when we found we had a day to spare in Memphis, of course we decided to make a pilgrimage to Elvis’s realm at Graceland.

It was not what I expected.  True, the original house and grounds have undergone Disneyfication, with separate large exhibition halls devoted to his cars, his costumes, his movies (running all day long)  his gold records,  and his effect on music.  Each hall has its own souvenir shop, and there are also several restaurants on the grounds.

But the original house, accessible by shuttle van only, is like a time capsule of the late 50’s and early 60’s.  The house itself is relatively unpretentious.  Tourists are reminded that Elvis was born in a two-room shack with outdoor plumbing, built by his father in Tupelo Mississippi.  The family moved to Memphis in search of opportunity when Elvis was a teenager.  Memphis was his home town;  this was the place where the people lived whom he trusted, and whose opinion he cared about.  So when he wanted to build a family home, he didn’t think of Beverly Hills.  He bought one of the nicest homes on the outskirts of Memphis.  The previous owner had been a successful dentist. 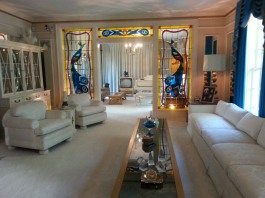 Inside, the house is decorated in early 60’s middle-class style:  lots of mirrors, lots of white and gilt, lots of crystal chandeliers, lots of silver on display in china cupboards, lots of shag carpeting. The den is upholstered in paisley prints, the TV room with its adjacent bar is lacquered yellow and black, and has three vacuum tube TV sets so Elvis could watch all three major channels at once.  (I guess PBS did not rate its own set.)  We were told that most of the rooms had been redecorated several times, reflecting the taste of whatever girl friend Elvis was hanging out with at the time.  On his own, he tended to like a lot of purple and pink, but his mother (yes, his parents lived in the house with him)exercised some restraint, and would not allow him to fool around with the kitchen at all. 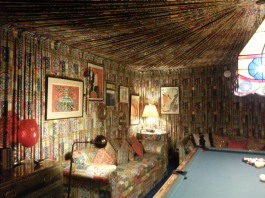 There is a charming story told in a children’s book available at one of the gift shops, about how a young Elvis used to look in the windows of Lansky Bros. clothing store in Memphis, and one day the Mr. Lansky invited him to come in and take a closer look. The two chatted, and later when Elvis needed clothes for his first concert, Mr. Lansky extended him credit purely on his assessment of the boy’s honesty and potential.  , According to the story, after Elvis hit it big, he bought all his  clothes from Lansky Bros., who would sometimes just send out a van full of clothing for Elvis to choose from.

The costume exhibition and the car barn made me think most about the older Elvis, the raddled, paunchy, sequined, padded and corseted entity of the Vegas years.  But the house evoked the quiet, well-mannered young man whom everyone he met seemed to like, before fame took him in its grip. 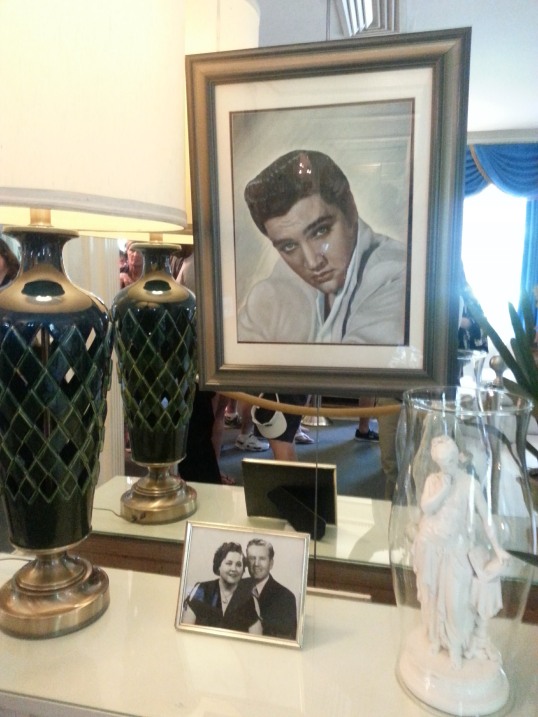