Freeway Free in Texas: San Antonio beyond the Alamo and the Riverwalk

We walked down the Riverwalk to La Villita, an  art area in a restored old section of San Antonio, replete with marvelous old tilework. Had a simple but ample breakfast with a server who was a cross between Jack Black and chirpy Ranger Tatum.

Next we drove to the Medina River Natural Area. We hiked mostly level trails along the river bank, with a few ups and downs between riparian and chaparral ecosystems.  I counted 21 varieties of wild flower plus four types of butterflies, and heard many bird songs. We were warned about some feral pigs in the area but saw none. 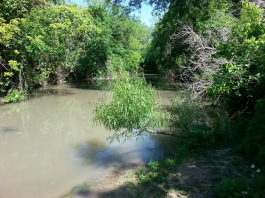 Lunch at Lai Wah’s Place, a modest Chinese restaurant in a strip mall thronged with locals, very good Cantonese-style food, old-fashioned fake paneling and suspended ceiling decorAFter , waitress moving at top speed at all times (hence the blurry photo), did not even have a chance to impress her with my Chinese.

After lunch we continued our explorations to the  Denham Estate Park to see the beautiful Korean pavilion donated by San Antonio’s sister city Gwangju in Korea. ( I wonder what San Antonio sent in exchange?)  The pavilion is very lovely sitting over a pond on lovely grounds.  Unfortunately the  Denham home which is in the center of the park is loudly marked “no trespassing, no public restrooms.” A bit off putting!.

Next on to the marvelous McNay Museum in northern San Antonio, in a  mansion which seems to have been blended from elements of the Ahwahnee Hotel in Yosemite and the old plaza in Santa Fe.. Lots of stenciled roof beams,  tiled stairways and benches, an interior patio, iron grill work… 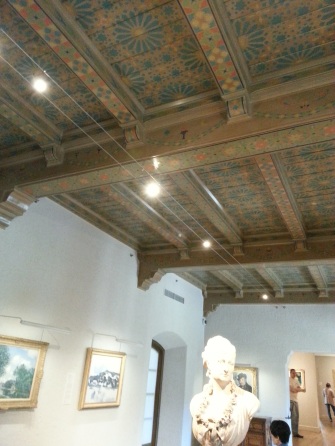 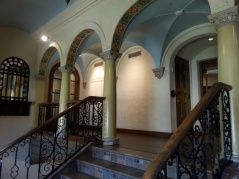 …and some amazing art, ranging from medieval to Monet and Mary Cassat, plus some Southwestern ethnic stuff.  Outside in the sculpture garden another LOVE sculpture, as previously seen in Taipei, Tokyo, Albuquerque, and Philadelphia. And some Rodin. 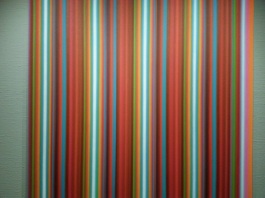 Blown away by all this exercise, culture, and art, we finally made it out of town, having skimmed a lot of the cream of San Antonio.

Freeway Free in Texas: The Missions of San Antonio

I had not been aware that the Alamo is only one of five San Antonio missions which together comprise a National Historic Park as well as a World Heritage Site.   W and I saw them all.

The Alamo is not a large building, and until the Daughters of the Republic of Texas appealed to the state government, it was in danger of disappearing entirely under one or another wave of urban development which swept over San Antonio.  Now, of course, it is a cultural icon as well as a huge tourist attraction.   The State of Texas has taken over responsibility for funding its maintenance, with the DRT acting as custodians.

Since its time as a church, the Alamo has been an army barracks, a fort under bombardment, an army storehouse, and simply abandoned.  No wonder it is the least lovely of the five San Antonio missions.  It has no bell tower, no frescoes, no WPA restoration of dubious accuracy, no green lawns.  It does have some beautiful old live oak trees which were transplanted to the grounds, and a very well stocked gift shop, and mobs of tourists coming in waves from tour buses. We chose an audio tour so that we could try to go where the bus tours and field trippers were not, but were only partially successful.

The other missions make up in picturesque elegance what they lack in historical drama.  Conception has two towers a la Notre Dame de Paris.  San Jose has expansive grounds and a lovely window called “Rosita’s window” through which those Indians who were yet unbaptized could peek in and observe the religious ceremonies.  Here we were guided by the  incredibly perky Ranger Tatum who gave us a chirpy but very modern tour of the “Queen of the San Antonio missions” – exposing the inauthenticity of the WPA’s reconstructions, and the wrong-headed -ness of the priests’ aspirations regarding the natives.

San Juan has been spiffed up with whitewash and has an open belfry with the five bells arranged in tiers.  Estrada is the last and least restored, but its dilapidation has a raffish charm all its own.

The missions were opened as a way of establishing Spanish culture and faith in the New World;  the missionaries were at the same time agents of the King as well as of God.  The natives came to the missions as a last resort – they were being terrorized by tribes of Apaches who were invading south Texas in order to escape the even more martial Comanches, and they were dying of sicknesses brought by their early contacts with the Spanish.  The missionaries promised shelter from and defense against the Apaches, which they delivered in exchange for the natives’ abandoning their language, beliefs, and culture – even their names.  However the missionaries could not protect against the illnesses.  The priests believed that the natives were dying because of their sinful lives, not because of contagion, which was not then understood.  By the end of the mission era, 80% of the indigenous tribe members who had come to the mission for help were dead.

Lovely weather, and as we proceeded sown the Mission Trail the outer Missions were progressively emptier.  We walked a lot, mostly on paving stones and bricks and clinkers.  We felt we had earned a margarita at the end of the day at spangle-lit Mi Tierra, the doyenne of San Antonio’s Mexican restaurants. followed by a delicious platter of Monterrey Speciale, and a middling good flan to share at the end of the meal at the end of the Trail.

My mother loved to entertain.  By that I don’t mean she would sit at the piano and sing torch songs, or tap dance around the living room.  Hers was the old-fashioned idea of entertaining, where one invited a mix of people to enjoy good food and drink in an attractive setting, and hope to generate lively conversation, a good bit of laughter, and some warm memories.  The mix would include some old friends who could be counted on to maintain the conversation and the party mood, and some interesting new acquaintances who might become friends (and usually did, after attending my mother’s parties).

When we have friends over, it is almost always a potluck where everyone brings a platter and a bottle to share. We are working people, we think, and can’t take the time to entertain the old-fashioned way.  My mother would have scorned this limited idea of hospitality.  Whether it was a bridge party, a ladies’ lunch, or a party for the entire faculty of the school where she taught, her parties were carefully orchestrated from appetizer to dessert, sometimes with a theme, always with an eye to what new acquaintance would add spark to the mix, what combination of people would ensure a lively gathering, and who should sit next to whom.

Her cupboards were full of party equipment.  Her dining table could be extended to accommodate 6, 8, 10, or 12 people.  She had tablecloths and napkins to accommodate each size, plus pretty crystal place card holders to let people know where they should sit.   For bridge parties and ladies’ lunches she had smaller table cloths with matching napkins.

She had high-ball glasses and champagne glasses and wine glasses and martini glasses.   For larger parties she had a glass punch bowl with two dozen matching glass cups, a ladle, and a special mold for making an ice ring full of frozen fruit to cool the punch.

With my father’s help she would choose and tape appropriate  music to be playing in the background for each party.  A few weeks ago I found a cassette tape in my mother’s house labeled “Party tape – Once a year day!”

As I played the tape through I remembered that party.  It celebrated my father’s 60th birthday, my parents’ 35th anniversary, and the  ceremonial burning of the mortgage for the house in Los Altos, and also served as a wedding reception for my younger brother and his wife. The sound track was full of happy tunes: “Once a year day” from “The Pajama Game” , “Happy Days are Here Again”,  a New Orleans jazz version of “When the Saints go Marching In”, jazz piano, and dance music (“Edelweiss” for the bride and groom who had married in Germany, “Always”  for Mom and Dad to mark their anniversary) There must have been more than fifty people flowing in and out of the house and back patio.  The punch bowl was refilled again and again. It was a wonderful day.

My mother and father are both gone now.  As I look over the items I am packing up from my mother’s house, I’m remembering the good food, good conversation, and good times associated with each jello mold and baking tin.  I’m also thinking I’d better start issuing more invitations, or the only party of mine folks will remember will be the wake.

Freeway Free in Texas: What my Texas History book forgot about the Alamo 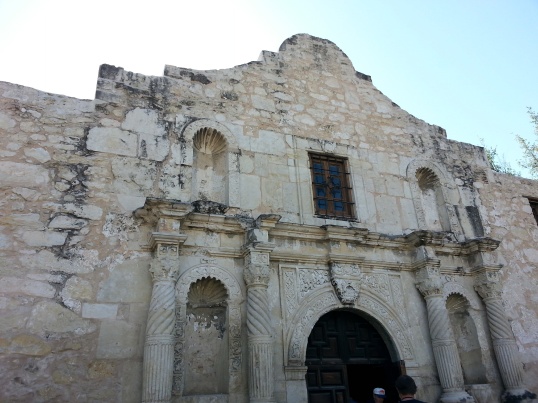 I had not been aware that the Alamo is only one of five San Antonio missions which together comprise a National Historic Park as well as a World Heritage Site.  The Alamo, of course, is the famous one, enshrined in national memory by a succession of movies – Fess Parker as David  Crockett, Steward Granger as Jim Boweie, John Wayne as David Crockett again, all making this bit of history larger than life.  I learned a lot that I had not taken in during my 7th Grade Texas History class, including:

Davy Crockett went to Texas to try to recoup his fortunes after a failed attempt at reelection to his Tennessee Congress post.  He was essentially bankrupt.

Santa Ana was not just the general defeated by Sam Houston at San Jacinto.  He was the Mexican general who led a coup against the established Federalist government of Mexico after Mexico gained independence from Spain.  He quickly established himself as the center of power, and had already put down revolts against his coup in three other Mexican provinces before moving north to put down the rebellion in Texas.  Following his defeat in Texas he was in and out of power as the President of Mexico for another twelve years.

William Travis, leader of the troops at the Alamo, had a black slave, Joe, who survived the battle and was allowed to go free to carry the news of the defeat to Sam Houston and the other rebels.  Sarah Dickinson, a Texian woman whose husband was killed in the battle, was also allowed to go free, just in case a slave’s tale would not be believed. (Or was it the other way around?)  The Tejano women and children who survived were also freed.  Joe was reported to have impressed the Texas Cabinet with “the modesty, candor, and clarity of his account“, but all the same he was returned as chattel to the heirs of the Travis estate.

So in some ways the war for Texas independence was a preliminary skirmish in the Southern defense of  their “peculiar institution” of slavery.  Somehow the heroic defense of the Alamo did not come across that way in my 7th grade Texas History class.