Archive for the tag “edmonton”

Canada: The Alien Next Door – Day One (Continued) – Intro to Edmonton

Across the Saskatchewan River from the Hotel Macdonald

From the 1916   pseudo-Chateau Frontenac architecture of the old Hotel MacDonald, a former railroad hotel,  to the pseudo-Gehry architecture of the Alberta Art Museum, Edmonton’s buildings bring smiles of surprise.  One of the nicest:  the City Hall with its celebratory arcade of fountains (unabashedly used as a cool-off pool by Edmonton’s children).  The boxy outside façade is relieved by rhomboid windows;  the inside of polished yellow marble and sandstone is a grand civic space with a monumental staircase sweeping upward under an I.M. Pei – like glass pyramid.

Too bad the bride I spotted disappeared before I could fumble out my camera – she was a brunette beauty in an elegant structured sheath gown of white satin with a black sash, and with bridesmaids all in black – this used to be considered weird but now appears to be the height of bridal sophistication. (See my earlier post to contrast with Russian brides.)

Edmonton is a city on the build – from 100,000 people at the turn of the 21st century it has exploded to over one million residents today, immigrants from all over drawn by the oil boom.  (Alberta oil shale provides 10% of the US’s oil needs and the share is growing.)  They are trying to keep pace by expanding the infrastructure, most notably with an expanding light-rail.  The resultant ongoing road destruction is known locally as “the Black Hole”. Meanwhile, bus stops in the central area link to 20 or more bus lines, with dozens of folks waiting for their public wheels at the bus stops.

Some of the creative destruction is admirable.  What used to be a grungy warehouse district bordering the railroad and the river has been converted into green parks, an arboretum, and an Arts District which includes a city-block-sized theatre and opposite it a city-block-sized public library.  A Folk Music Festival was about to begin on the Friday of our arrival and the area was swarming with pop-up restaurants, craft booths, and picnickers on the grass. Statues honoring everyone from Ukrainian farm women to Winston Churchill are scattered in every plaza.

By evening  across the river the open-air amphitheatre was filled  with thousands of listeners (Arlo Guthrie and his daughter were scheduled to perform).  We sat on benches watching the crowd grow.  As dusk fell, the mosquitoes rose, and we conceded the field, went in to dinner with our tour group.  This was our first experience together as part of a tour since a one-day tour of Beijing more than a decade ago;  we were curious to find out what the vibe would be like.

Dinner:  Open wine and cocktail bar; soup, salad, steak, sorbet. Lots of alums of the college which organized the trip, and a surprising number of professors (Iowa State, Portland State, Dartmouth), also wo brothers with wife and partner respectively; one family group with parents, two married daughters and spouses;  one Korean mother-daughter. Many have been on more than 10 Alumni Association trips.  Laughter, well-lubricated by the open bar, flowed freely as the co-tourists introduced themselves.   I talked of our previous attempts to see the snow-capped peaks by rail (both on Amtrak, both derailed by Amtrak’s famously inept scheduling) , and our having snuck into the Banff Springs  swimming area multiple decades ago as part of a camping trip across the continent – pulled a nice laugh from the group.

We stepped outside after dinner hoping to hear a few echoes of the festival across the river, but Arlo was singing into the wind in the opposite direction. Tomorrow we begin our expedition. 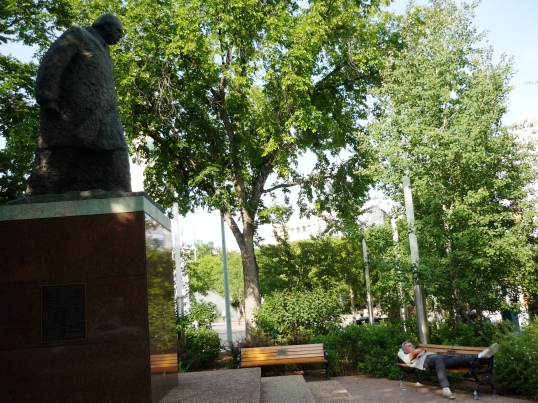 Slacking off in the sunshine – Edmonton Civic Center