The day begins in a ballroom/classroom in the stately Banff Springs Hotel – we learn that it was originally built by the railroad to lure tourists to western Canada (just as the El Tovar Lodge and Ahwahnee Hotel were built in the US to bring tourists to the Grand Canyon and Yosemite).  How ignominious to know that this World Historic Site is now owned by a consortium fronted by the Fairmont Hotel chain and largely funded by Arabian oil moguls.    You can still see the Beaver logo of the Northern Canadian Railroad engraved  in the archway over the fomer main entrance to the Banff Springs Lodge.

After the lecture by our Canadian tour leader, we tour the hotel – the Ballroom, the Conservatory, the Cigar Lounge, the Alhambra Room – if a movie is made based on the game of CLUE, here is the natural setting.

Then  a bus to downtown Banff and a tour of the Whyte Museum of the Rockies, with a lively introduction to the exhibits by a senior curator.  (I want to live in the Whyte cabin: all natural wood, built-in furniture, and thousands of books.)

After a rain – sprinkled promenade in the town of Banff (think Carmel with an influence of snow) and a lunch at the  Chinook Restaurant (Denny’s with a smile and a view), I walked in the Cascade Gardens overlooking the Bow River.  Sad to say, the historic cascades have dried up along with the maintenance funding, but the flowers are still brilliant, maintained by a dedicated group of volunteers).  The view from these gardens down the main street of Banff to the mountains opposite is post-card pretty (see above. 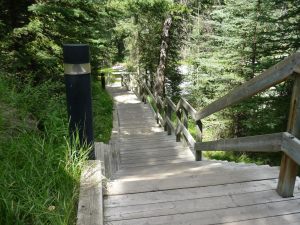 Next we wander along a shady  trail bordering the Bow river with  lots of wildflowers, a couple of close encounters with grazing elk, and a view of  the Bow Falls.  (Tip: If walking this trail going downriver, turn back at the bottom of the the 200-step stair to get the full effect.)

There was another 200-step stair which brought up back to the Banff Springs hotel on its bluff overlooking the river.  Now that we had been to the falls, we could hear it rumbling in the background at all times – being a child of civilization, I had assumed the soothing low vibration was  traffic noise or air conditioning – a roaring waterfall is much more exciting!

Tomorrow: Bags are due out at 6AM as we prepare to board the Train. 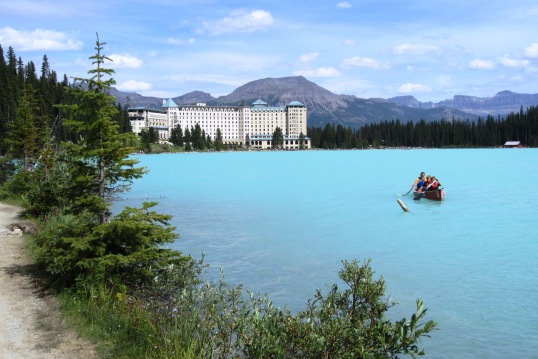 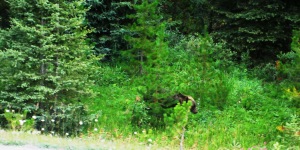 Canada – the Alien Next Door – Day 3 – The Jasper tourist loop

Day 3 is fully scheduled.  We are given an itinerary review at our

8AM breakfast and STRONGLY CAUTIONED not to be the last on the bus.  We managed despite accidentally locking ourselves out of the room safe with all our desirables inside – security has its price. After breakfast, a

9AM  lecture by our Canadian co-leaderBarry on Canadian people and politics build on the theme of successive immigration.  I had somehow never thought about what was going on in Canada next door while the US was experiencing its two hundred years of history.   I hope I will never take Canada as lightly again. At

10AM, the group clears its collective head from all that back-room political talk with a ranger-led nature walk around the periphery of the lake.  I would have liked to go the whole route, but we were due back at the lodge by

11AM  to  purchase “lunch on our own.”  That’s codespeak for “we’d have no hope of getting you all out on time if we tried to organize lunch for you.” We munched and crunched sandwiches from the downstairs deli so that by

12 noon we were all on the bus to Maligne Lake. 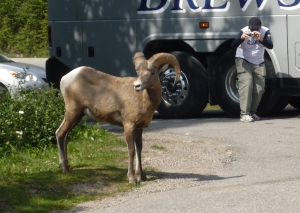 1:30 – on a boat tour of Maligne Lake.  This interglacial gem was put onthe Canadian maps by a woman  who had lost her 20-years – older husband and  both parents, within a short space, wanted to get away from her life, came to Jasper and married her 20-years-younger tour guide, a “Meti” (half Indian, half Anglo) who led her to Maligne Lake.  (“She was a cougar!” says tour guide Mark).  We take a boat tour out to the Photo Opportunity which makes all the post cards – a little island with a small grove of pine trees just off the shore.  (See the  Opportunity above).

4:45: we blow off a lecture on Rocky Mountain wildlife adaptation strategies and go swimming.  The Lodge includes a lovely 88 degree pool with  lots of sun, not too many children… very QUIET – no one lecturing or asking questions, blessed peace.

5:45:  We leave the swimming pool,return to our little cabin/haven to  dress leisurely for dinner.   Dinner is  outside on the deck with a 180-degree lake and mountan view,  fresh air and all the outdoors to dissipate the chatter of conversation.

9PM: The deck is the place to be, with the lake still glimmering, the late summer sun still loaning a glow to the sky,  and a storm visibly gathering, with clouds billowing grandly as if to belittle the mountains’ puny pretensions.  The wind picks up; the mosquitoes are gone, the stars are playing hide and seek beyond the clouds.

I have to keep reminding myself:  It’s probably not this perfect in February.  But for now – Wow!

Baggage out by 7:30 AM – What kind of vacation is this?  We board the bus after a breakfast of respectable scrambled eggs and hotel fruit and mini croissants with authentic Canadian  bitter marmalade, washed down by a flood of commentary from the indefagitable conversationalists at our shared table.  No shrinking violets in this group!

A bus, no matter how well equipped and well-upholstered, is still a bus, and a bathroom break is still required.  Not even a Stanford brochure could make the loo at Entwhistl’s lone Esso station a four-star experience.  Well, maybe the INSIDE one, but the line was long, so we were directed to the outside auxiliary.

Problem: no window and no lightbulb. Not even the guys could see where to aim.  Happily,  in my day pack was a souvenir key ring from a months- earlier trade show with a miniature flashlight.  We passed this gem around – my former employer EMC got value for its money with this marketing tool!

Lunch at Epson – at the intersection of 4th and 51st streets. Yeah, right.   A total population of about 8000 people means that about 45 of those 51 streets are merely a gleam in a developer’s eye. A three course meal at the Mountain Pizza and Steak House, then back on the bus all woozy from too much food and not enough exercise. Busing through the anorexic evergreen forest with equally anorexic birch trees crowding together – so much more vertical-looking than the robust pines and aspens of the lower Sierras! Down timber combines with melted snow rotting into mulch across the rolling tundra. The Rockies are a low-lying cloud layer in front of us. 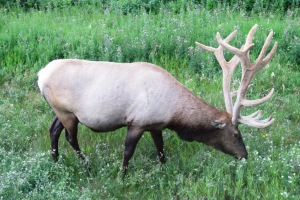 Then five minutes down the road we spot a giant – antlered elk on our side of the road, calmly grazing. More photos. Our guide is agog: “Never have I seen so much wildlife in such a short stretch. “ Fine with us!
On a clear day, I can’t imagine a more beautiful place to spend time than Jasper Lodge.  In addition to the breath-taking natural setting, there is  a large central lodge with lots of comfy chair groupings in which to sit and admire the wonderful view across Lac Beauvert toward the mountains. Lots of satellite cabins. Overflowing baskets of petunias and geraniums hanging from every lamppost and over every door. Blue sky, clouds rising and disappearing, mountains reflected in the glassy, forest-rimmed lake. Of the places we visit on this trip, none will invite us back more strontly.

Amenities of our tour include: A 5PM lecture on Glacial Geology by Scott Burns, the official Professor.  Drinks both spiritous and not  on the deck. Dinner of salmon with lentils and asparagus and a monologue on Canadian politics by Barry the Tour Guide.   We escaped to  quiet of our cabin.  Happily, we have another whole day at this bucolic refuge. 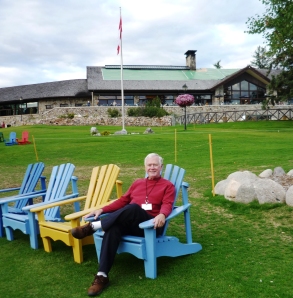 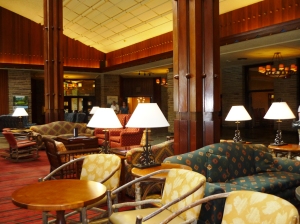