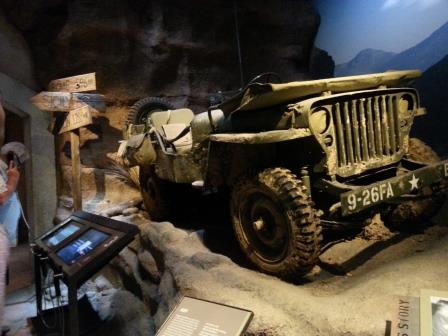 Why, I wondered, is the National World War II Museum in New Orleans, rather then in one of the principal embarkation cities for the European or Pacific fronts?

I guess I was not the only visitor with this question in my mind, as the neighboring plaque explains how A.J. Higgins’ design for landing boats “won the war for us” per Eisenhower, leading to the establishment of a D-Day museum in New Orleans, site of four Higgins plants.  Once the D-Day museum was established, widening its scope to include the rest of the war seemed sensible and cost-saving.  And the National World War II Museum is a true gem.

The main museum is divided into two major sections, one devoted to the European theatre, the other to the Pacific war. The exhibits include photos, little-seen films, recordings of memories from actual participants in the various political and military battles. I spent most of my time in the “Road to Berlin” section, while my partner skimmed through that to explore the Battle of Midway.   I also toured the exhibit adjacent to the lobby which covers the Home Front,  with dueling radio broadcasts from national hero Charles Lindbergh, the most prominent of the isolationists,  and Franklin Roosevelt advocating support of the British through Lend-Lease for Liberty.  Then Pearl Harbor settled it all.

An excellent introductory film, “Beyond All Boundaries” shows in the Victory Theater Complex, which also offers live entertainment in vintage 1940’s style. the film orients you to what was at stake in World War II and how the conflict developed.  Even with this as a guide, there is too much to cover in one day.  The Home Front section includes a 40’s era -themed Soda Shop where a visitor can sit down and refuel.

Other buildings include the Boeing Center which displays WWII era airplanes, and a Restoration Pavilion which features displays on the technology advancements that came about under the pressure of war.

The National WWII Museum is a far cry from Mardi Gras, the French Quarter, and Cajun cuisine.  But it’s a Don’t Miss!

One thought on “Freeway Free in New Orleans: the National WWII Museum”