Freeway Free in France: Tales of War in Bayeux 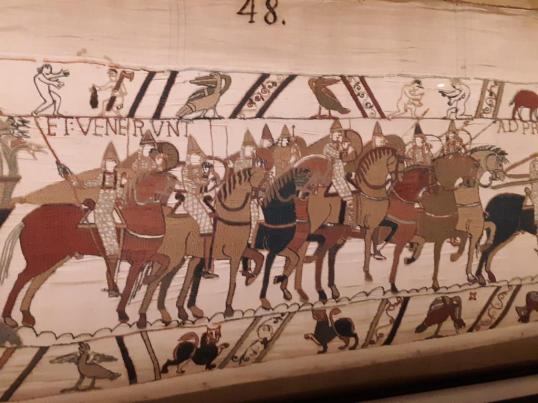 Bayeux was the first French city to be liberated by Allied Forces.  Troops marched into the city on a street bordered with cheering townsfolk who waved French and American flags, and offered kisses from happy young women and fresh baked treats from older ones.  The Germans evacuated so quickly that they had no time to organize a defense, so the most of the medieval structures remained intact.

We first stopped at Bayeux Cathedral, with its mix of old and new stained glass, its ornate Gothic verticality, its mystic paintings decorating the crypt beneath the alter.  The apse was decked in French tricolor, British Union Jacks, Canadian maple leafs,  and American stars and stripes.  Behind the altar there was a large concert band practicing for Prince Charles’ visit the following day (Wed. June 5).  This was a truly excellent brass ensemble, plus some woodwinds and tympani.  The sound reverberating through the cathedral was thrilling.  One piece was “The Spitfire Overture” and another, appropriate for a visiting Brit, was the lovely, noble main theme from “Jupiter” from “The Planets” by Gustav Holst.  My partner, a music-lover with bad knees, stayed in the church for the whole rehearsal while I wandered around the side chapels and lower levels.

Right across from the cathedral is an old store front set us as a Lace Museum, with lovely examples of the prototypically Breton/Norman craft.  Unfortunately, I have since read that the Lace Museum is in danger of being closed, as it is funded by the city of Bayeux and patronage has been light.  So don’t forget to stop in!

Just down the street is a more modern museum of Breton arts and crafts, housed in a former bishop’s palace, with lovely landscape paintings, more lace samples, and a well-stocked gift shop offering post cards and booklets about the medieval city, its role in World War II, and its artistic heritage.

Of course, Bayeux is most famous for that other artifact of war, the Bayeux Tapestry, now displayed beautifully in a circular museum which allows the entire 200 feet of  embroidered cloth to be shown, accompanied by an audio commentary provided through headsets to each visitor.  (This device not only fills you on details a guidebook may have overlooked, but it artfully keeps the visitors moving forward as the audio commentary moves forward to the next panel.  No pause button. ) Notice the way the borders complement the action, with dead and dying soldiers, archers, and mythic beast bordering the action-packed cavalry sequences.  The Bayeux tapestry is like an early graphic novel, with leading characters easily identified by distinctive dress or hair, and scenes of ribaldry aleternating with the diplomacy and bloodshed.  Definitely a Don’t Miss!