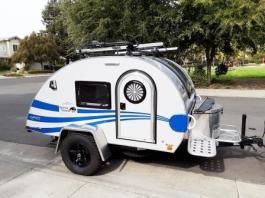 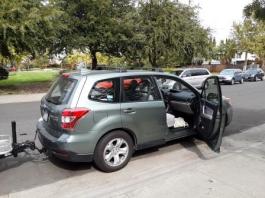 My sister fell in love at first sight when she saw a tiny teardrop trailer on the cover of Sunset magazine. Was this the solution to all the packing and preparation needed for a simple weekend camping trip? Could a trailer provide grab-and-go adventure?

She had done a trial weekend, renting a teardrop with a close friend, whose full-size SUV had no trouble pulling a tiny trailer while carrying a couple of bicycles and duffels in its rear. But would Sis’s little Subaru hatchback be able to tow and stow? She decided to try it out on a trip to the Pacific Northwest, to visit our brother and his wife in their new house. Bro had a trailer already, so we could trailer camp together over the weekend. And so she invited me on a road trip with the object of her passion.

Camping without bicycles, to Sis and her husband, would be like going to Hawaii without swimsuits. They routinely bike 30 miles on Sunday morning for a cup of coffee. Bro assured us that the campsite he had in mind had miles of beautiful bike trails, so Sis rented a trailer equipped with a bike rack on top, and I brought my bike to keep her company.

The trailer rental guy at Sierra Teardrops had shown Sis how to set up the bikes on top of the trailer, but she had not actually tried to do it. It was apparent almost immediately that there was no way she, at barely 5 feet tall, and I, at 5’3”, were going to be able to hoist even her lightweight bike to the top of the trailer, much less get it properly affixed in the rack. But abandoning the bikes was not an option. We pulled all our gear that had been stowed in the Subaru and piled it into the trailer, and then wrestled the two bikes into the back of the Subaru. Not easy. We were both sweating by the time we had managed to make them fit, and we were now an hour past our hoped-for departure time.

Off we go. Just short of Mt. Shasta we stop for gas. Sis can’t find her purse. Is it buried under the hastily stowed stuff in the trailer, or did she set it down in the house while picking up some last-minute items from the fridge? She phones home. Husband is home from work, looks all over, can’t find the purse in any of the places she usually sets it down. We cross fingers that the purse, with Sis’s driver’s license, is in the trailer somewhere. Meanwhile, my credit cards work, and Sis drives carefully.

We had planned to camp at Castle Crags state park north of Mt. Shasta, but even on a Wednesday in October, they were full! So on we go, aiming for Valley of the Rogue State Park just north of Ashland. By the time we arrived and found a  vacant space, near 8PM, it is dark. And it is raining. Hard.

I had been assiduously reading the extensive directions which come with the trailer all the way up Interstate 5. They recommend that you practice backing the trailer up before you actually take it places, as “backing a small trailer is more difficult than backing a large one.” We had not done that. Oh well, we think, we will just pull into the space forward, and deal with backing up tomorrow morning when we can see, and maybe it won’t be raining. Bad idea. We discover as soon as we were headed into the space that all the trailer hookup attachments are conveniently located on the side which would be close if the trailer is backed into the space, but are just too far for the cables to reach if you head in. So Sis has to back out of the space, circle the campground, and then try to back into the space. In the dark. In the rain. I stand outside to give directions, and Sis tries her best, again and again.

Will Sis succeed in positioning the trailer in its slot?  Will we ever get to eat? Will the purse show up? Stay tuned!

5 thoughts on “Travels in a Tiny Teardrop Trailer – Day 1”