You know World Heritage sites – the Pyramids, the Great Wall, Chitchen Itza, Macchu Picchu, the Taj Mahal – but you may never have heard of Bhaktapur, Patan and Kathmandu’s Durbar Squares, the Buddhist stupas of Swayambu and Boudha, and the Hindu temples of Pashupati and Changu Narayan.  Tiny Nepal is the home of ten World Heritage sites, of which seven are in the valley of Kathmandu.

On our first afternoon we saw

Boudha – a huge stupa (Buddhist temple) surrounded by Buddhist schools and monasteries.  The stupa consists of a very large square structure with a staircase at the center of each side, decorated with prayerwheels in niches all around at elbow height.  This is very convenient for the pilgrims who orbit the stupa, always going clockwise, as they constantly reach out to keep the prayer wheels spinning as they walk. (Do you think they get Prayer-wheel elbow?)

On top of the square structure, which symbolizes the earth, is a very large white dome decorated with faded yellow paint in lotus petal designs – this symbolizes the air.  Atop the dome is another square structure painted gold, with two huge eyes looking out from each side – this symbolizes the all-seeing Buddha.  Atop the Buddha block are 13 more blocks, gradually diminishing in size – these are the 13 steps toward enlightenment.  And on top of these – a golden umbrella, symbolizing the cosmos.

And everywhere are flags, fluttering prayers into the breeze.

I compare this structure to the great Gothic cathedrals with their cross shape, and the huge symmetrical mosques of Istanbul carefully oriented toward Mecca – the attempt to embody the universe in a building takes my breath away.

Pashupatinath – this is a very holy Hindu site in Nepal, along one of the sacred rivers coming from Tibet.  We saw several cremations in progress in various stages, from the dipping of the body into the sacred river, to the preparation of the pyre, the covering of the body with straw, the burning, the sweeping up of the ashes afterward – all from a distance from the other side of the river.

The temple is a favorite destination spot for Sadhus, the holy pilgrims who smear themselves with ashes, leave their hair uncut, and wander in from India with only a cloth for decency, a trident, and a begging bowl – right out of Rudyard Kipling!

And for monkeys – we saw a few hanging about on the fences and steps, but suddenly at the ringing of the temple bell at 4:30 they came over the steps in a wave, screeching, scuffling, carrying babies clinging to stomach and backs of the mothers.  They all headed across the bridge nearest us, and within a few minutes the opposite side of the bank nearest the temple was scrambling with monkeys on every step and protuberance, where there had been none before.  Our guide swore that no monkey-feeding goes on – what could have happened in the monkey-mind to drive this impulse? 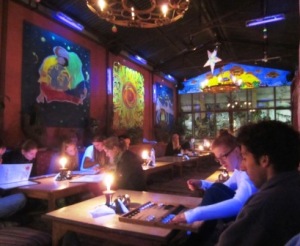 We ended the day at an Israeli-run vegetarian restaurant called, obscurely, OR2K.  Or2K is a fallback to the 60’s – no chairs, low tables, lots of cushions, black light causing white shirts, socks, and various decorations about the restaurant to glow fluorescently.  The food turned out to be both excellent and abundant.  It was rather restful to sit on the floor against the cushioned backrest, eat mostly with our hands, listen to music inspired by George Harrison, and try to figure out which of the young trekkers coming in and out were connected or likely to be.

From reminders of Rudyard Kipling to evocations of George Harrison in a few hours – I had the sense of being in a berserk time machine skipping from century to century and culture to culture. This would recur to me a lot during my time in Nepal.