Three major World Heritage Sites, all within a few kilometers of our hotel.  This happens because the Kathmandu Valley was formerly cut up into a number of little fiefdoms, each of which had its royal family, royal palace, and religious centers, so we get a bunch of World Heritage Sites all balled up in one touring package.

Other World Heritage Sites I have seen, – the Taj Mahal, the Forbitten City in Beijing, Chitchen Itza – seemed  ruled by a sense of order – the rigid geometrical symmetry of the Forbidden City and the Taj, the graceful balance of temple sites in Japan, all seemed to reach toward some ideal perfection.

Nothing remotely orderly about either of the public spaces we saw in Kathmandu and Patan – I felt as though I was seeing some sort of divine rummage sale – Hindu, Buddhist, Animist shrines all jumbled together in one space with no attempt to organize.  I was dazed by the clutter. 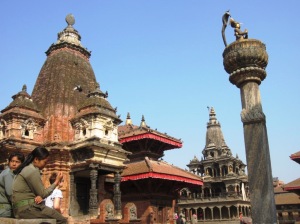 Patan Durbar Square:  Durbar means “palace” and indeed there is a palace on one side, now transformed into a museum.    The square is packed haphazardly with buildings and monuments and plinths, some topped with gilded statues, some ringed with stone lions, some of brick, some of white stone.  The whole effect is something like a garage sale of religions.   Shaku pointed out that the general architecture of some of the buildings echoed the pagoda idea of China, and she seemed to say that a great architect of Nepal went to China and influenced this style there.

Swayambunath -The “Monkey Temple” – The biggest stupa yet, perched on a hillside high above the valley, ringed by yet higher hills unfortunately obscured by valley smog on this warm day.

Kathmandu Durbar Square: yet another jumble, of stupas, temples, and shrines, plus a schizophrenic palace-now-museum with one huge wing in the old style of Kathmandu (red brick trimmed with heavily carved dark wood doorframes, window grilles, and balconies) and the other a glaring white Doric-columned wedding cake in the style of a very pompous British bank – grafted onto the old palace by a turn-of-the-century king who unfortunately visited the UK and came back with Modern Ideas.

In the evening, Shaku had arranged for us to attend an “authentic Nepalese” dinner/folk dance performance at the Kathmandu Kitchen.  She does well with restaurants.  The outside looked dubious, the bar above the street deserted, but on the third floor a banquet hall was set with tables of various sizes with room for about 80 people, and at one end a mural depicting Patan Durbar Square and a raised platform.  We got good seats at the side front along the wall;  by the end of the second course the room was nearly filled by two large tour groups (one German, one maybe Australian), a party of French people, and a few others whose languages we didn’t catch.

The performance was high-spirited and varied, four young people dancing in the mode of the Sherpa, the Tibetan, the Pathan, the Nepali – some seeming influenced by Mongolia, some by India.  The highlight was the Peacock Dance, in which a dancer arrived in a giant peacock costume, complete with bobbing head and a tail which rose and spread into an impressive fan at the conclusion of the dance.  The last “dance” was actually a comedy routine involving fire breathing – the one Nepali speaker in the room laughed a lot at the dialogue, but I think she was a girl friend of one of the performers.

Dory and I ended the day triumphant – we were able to guide our taxi driver back to the hotel with no glitches.