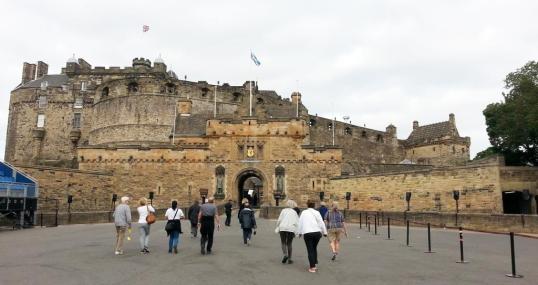 I can’t say I knew Scotland better after a whirlwind tour, and certainly gained no real insiders knowledge of its captital, Edinburgh.  So I will give you a bullet list, and some photos, and leave you to explore this fount of history and legend as you will.

We traveled on a comfortable, modern first-class Virgin Atlantic coach from York to Edinburgh, and although the train was an hour late due to a malfunction somewhere along the line, the wait at the York station was not uncomfortable, with lots of people-watching to be done.  Once on the train, we enjoyed   lots of leg room, tasty snacks, and lovely scenery right out of Van Gogh with yellow/green checkered fields dotted with hay bales, and fringed with purple loosestrife.

We stayed luxuriously at the Balmoral Hotel, just next to the train station.  (The hotel clocks are all set 3 minutes fast, to make sure guests don’t miss their train!)  Super elegant, super convenient.

We had an excellent lunch at the Whiski Room pub for delicious chicken, leek and carrots and beans, layered scalloped potatoes, a pint of IPA ale.  Later we splurged on an elegant dinner at The Dome, a restaurant that started as a physician’s college (hence the caedaceum in the stained glass windows), then was a bank headquarters, and is now a beautiful restaurant with 6×6′ floral arrangements and the most elaborately decorated ladies room I have ever seen (embroidered damask satin wall covering, six foot arrangements of orchids, gilt sun burst, carved and etched mirrors…).

We had a head start at Edinburgh Castle, being admitted  in advance of the other 10,000 odd visitors it receives per day. But in rushing to stay ahead of the throngs, we had little time to savor the history.  Here was where Mary Queen of Scots gave birth to James, and began all the resulting civil and ecclesiastical warfare..  Here is the fabled Stone of Scone, restored after centuries under the buttocks of English monarchs to its rightful place among the Scottish Crown Jewels.  Down the road is the square where the Bonnie Prince rallied his troops  in his ill-fated rising against English rule.  And further on is  Holyrood Palace where his grandmother Mary struggled against her own lords to maintain her majesty, and where Queen Elizabeth still stays during her annual visit.

Hope for good weather, and take your time!  Edinburgh is a joy to walk about in, and there is a story around almost every corner.