I  was thrilled to be going to York long before I had seen a picture or read an itinerary – as a long-time fan of Josephine Tey’s The Daughter of Time, I’m convinced that Richard, Duke of York, got a raw deal in Shakepeare’s heavily politicized portrait of him as Richard III, hunchbacked arch-villain. So I was eager to see the city which had given him his title, and which, according to history, mourned his overthrow by the usurper Henry Bolingbroke.

York has a lot more than Richard III going for it, though.  It has a beautiful minster cathedral which rivals the best of France’s Gothic cathedrals, with stunning stained glass and a flowerlike central vault.

Unlike most European cities, York still has a nearly intact city wall, which makes for a charming and informative stroll along its ramparts.  From any vantage point on the wall you get views of the minster, plus sneak peeks into verdant gardens, lively back yards, and the lives of modern Yorkists. 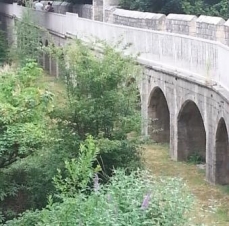 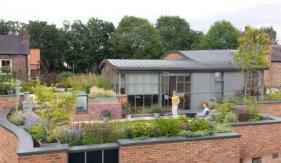 Within the wall the city maintains a medieval character wit its narrow twisting streets and odd alleyways, while somehow exuding a modern energy and excitement.   Outside the wall are other points of interest, including a really comprehensive railway museum calling attention to when York was a rail center for all of northern England.

My railway buff husband would love to spend more happy hours there, while I would return for the alleyways and pubs and to walk a few more miles of the wall.