From Caernarfon Castle we moved inland to Conwy, a walled market town with some beautifully preserved Elizabethan homes. I could imagine the burgher who lived in Plas Mawr inviting other village citizens to dine, quaffing local ale and bemoaning the unreasonable demands of the lord of the adjacent castle. Meanwhile, the servants in the adjacent kitchen would be skinning the local game and trying to keep drops of sweat from dropping into the soup.

Moving forward several centuries, we stopped at Betws-y-Coed. The ultra-quaint railway station with its ivy covered veranda spoke of Victorian solidity and permanence.

But the twin ecological monuments on the veranda spoke to very different 21st century concerns. 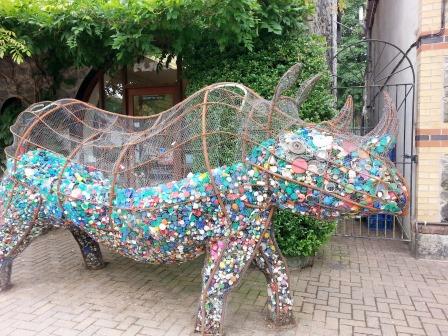 Our next stop brought the world of the castle firmly into the 21st century also, as we stopped at Gwydir Castle, a Tudor-era manor whose young owners have taken it from being an abandoned white elephant to being a reasonably profitable and comfortable bed and breakfast.

The 500 year old cedars have been saved, the ghosts (both human and animal) have been exorcised), the plumbing, including the fountains, has been restored, decorations plundered by William Randolph Hearst and others have been (at least partially) restored, and there are peacocks begging for crumbs when tea is served in the garden.  (If you want to know more about the restoration, Judy Corbett has written a charming book about the process, Castles in the Air. You will never be able to hear or see the term “fixer-upper” again without a smile.