Freeway-Free in Wales: In Merlin’s Footsteps

I’m a lifelong fan of Mary Stewart’s four-volume chronicle of King Arthur, told mostly from Merlin’s point of view, so when I found myself touring around the mountains of Snowdonial and through the fortress castle of Caernarvon on the banks of the river Seiont, I pictured the young Merlin with his visions and ambitions in some of the same places.  Wales is a bit magical still.

The castle was expanded and reinforced by Edward I long after Merlin’s time, and subsequently became the ceremonial site for investiture of the Prince of Wales.  It is surrounded now by a car park and a playground, and throughout the grounds are informative placards for a self-guided tour.  But there are still nooks and crannies where I could imagine a young boy hiding from bullies and enemies, over-hearing secrets, and receiving bulletins from the God.

We had unusually balmy weather as we toured around Mt. Snowdon the highest mountain in Wales, the Grey King of legend, so it was easy to imagine myself into the shoes of the other literary characters who kept thrusting themselves into my memory as familiar geographical names came up.  If you are an Arthurian junkie, you will find remnants of T. H. White’s “The Once and Future King”, Marion Zimmer Bradley’s “Avalon Saga“, Susan Cooper’s “The Dark is Rising” series, Bernard Cornwell’s”Warlord Chronicles”, and other classic and not-so classic versions of his legend wafting across the landscape.  If you have missed any of the above, follow the links to some excellent reading adventures! 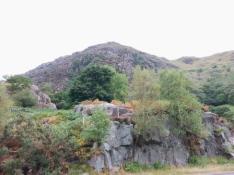 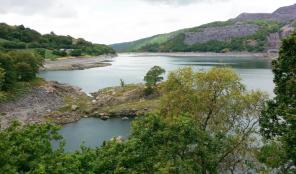 One thought on “Freeway-Free in Wales: In Merlin’s Footsteps”