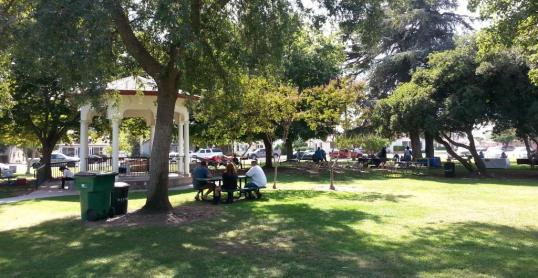 Traveling north from the Bay Area along I-5 on the way to Portland? You may have looked at the map and figured you could get something to eat at a fast food joint on the outskirts of Red Bluff or Redding. And you probably can. But if you had an early start and want something with a bit of local color, why not try Orland instead?

Orland? I’d never heard of it either until my live-in travel agent announced that Orland would be our lunch stop. But this small farm town boasts not one but two idiosyncratic eateries that are worth your while. 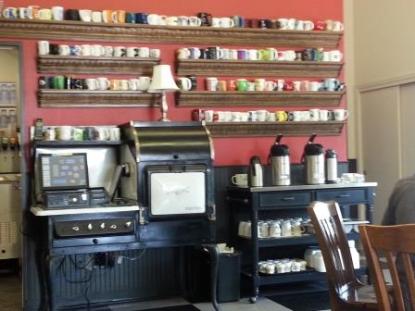 The Berry Patch is just to the left at the Orland off-ramp.  Despite its name, it specialized more in BBQ and burgers than in berry pies.  We opted instead for the 4th Street Cafe a few blocks off the freeway and down to the right. We were encouraged to see a police car parked in the lot – almost always a sign of good eats and substantial portions. Inside, the focal point of the large dining room is an ancient Hotpoint electric stove against a wall covered with shelves laden with the mugs of regulars at the cafe (I presume, although some of the shelves are so high that there must be a retirement home for NBA players nearby. )

The menu was basic: hamburgers, cheeseburgers, patty melts, Chicken, tuna, and BLT sandwiches, Cobb, Taco, and Caesar salad. The breakfast menu is served through lunchtime.  (The Cafe is open for dinner only on Friday and Saturday)

My LITA ordered the Patty Melt with “home-made BBQ chips.” After finishing every crumb (not even a teeny taste did I get!) he told the waitress to relay his compliments to the cook for “one of the best patty melts I ever had.” – high praise as this is his go-to choice on the road. I did get to share some of the BBQ chips, and I will never waste my time eating chips out of a bag again – they were exquisite! Fresh, bubbly with crispness, nicely spiced, a little bit greasy, and not a jot of preservatives.

I chose Avocado Toast from the breakfast menu, with a poached egg on top. Good bread, a perfectly ripened and sliced avocado, a nicely poached egg. The avocado could have been warmed up a little to match the toast and egg, so the dish fell a tad short of perfection, but it was pretty near a perfect light lunch for traveling. We could not resist adding a couple of cookies to go from the cookie jars on top of the bakery rack. Dessert for the evening, if they last that long.

After lunch we walked off a calorie or two at the adjacent Library Park – an oasis of greenery and shade, complete with a bandstand and evident signs of a major festivity impending. The Library is an old Carnegie library building converted into a community center, while a newer, less picturesque but presumable more functional library has replaced it in the same park. Across the street from the park are a spiffy new police station and city hall. A new Lincoln waited at the stop sign as I crossed the street – there must be money in this town somewhere. 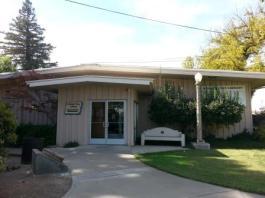 The rest of the downtown is as dilapidated as you would expect for a shopping area too far from the freeway and too close to the nearest Wal-Mart. But this little piece of Orland around the Library Park is plain and simply pleasant, seemingly miles  from the six-lane artery thundering by a few blocks away on the other side of town.