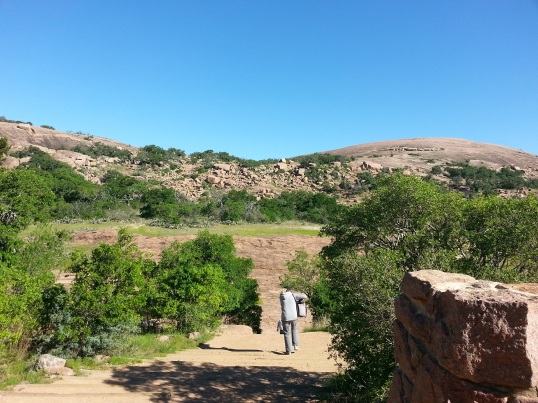 I thought I was accustomed to startling rock landscapes, having hiked to the top of Yosemite’s Half Dome, ridden a mule to the depths of Bryce Canyon, and driven dirt roads through Monument Valley.  But Enchanted Rock State Natural Area is in a separate class.  It features  a large pink granite dome which looks like something escaped from Yosemite, exfoliation and all, except it is the wrong color.  And except that, according to the geological information provided in the trail guides, most of this giant formation is buried under eons of silt deposits.  The summit is 1823 feet above sea level, offering wonderful 360 degree views of the Texas Hill Counry.  If it were fully exposed, it would cover an area as large as Manhattan, and be as high as Half Dome. 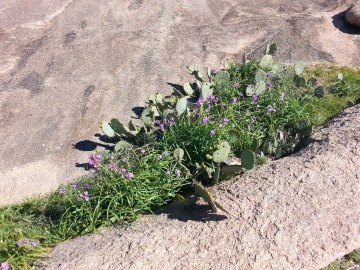 The  Summit Trail is an easy two/thirds of a mile from the principal parking lot, which also offers convenient rest rooms and picnic tables for befoore or after your hike.  The climb  is steep and without handholds.  Recommendation – Bring a walking stick with a rubber tip to act as a third leg to brace you against the slippery rock and the howling wind which on our visit was blowing across the top at about  30 mph.  Recommendation #2 – make sure your hat and your sunglasses, if you need them, are both secured with a cord. The wind nearly took my hat as I crested the summit, and my sunglasses went flying  as I was grabbing for said hat.  After I had secured them in a Velcro fastened pocket  and wrapped a scarf about my ears, the whistling of the wind bothered me much less! Recommendation #3: wear a scarf.

But oh, it was bracing to be at the top!