…Everyone’s entitled to be wild/ be a child/be a goof/ raise the roof/Once a year – lyric from The Pajama Game
On the last Sunday in June, it seemed as though everyone had taken this old Broadway patter song to heart. It was Gay Pride Day in San Francisco, and 1.5 million people were celebrating the Supreme Court’s decision earlier the same week invalidating the Defense of Marriage Act and California’s Proposition 8. Eighty unisex couples had married on the previous day at San Francisco City Hall; the party on Sunday was, in the words of a Mercury-News reporter “like the biggest, happiest wedding reception you could imagine.”
My husband and I had ridden BART up to the City to attend a San Francisco Symphony program, and were swept up in the festivities as we made our way from the Civic Center BART station to Davies Hall. All around us were men and women wearing rainbow colored tutus, fanny wraps, neon lace stockings, and costumes creatively cut out to show off tattoos in peculiar places. We saw a man on stilts clad head to toe in purple feathers, another person of indeterminate sex clad from top-knot to platform shoes in silver glitter, and T-shirts emblazoned with rainbows and mottos ranging (among the printable) from “Some Chicks Marry Chicks – Get Over It” to “Christ is Coming – Look Busy.”

As we threaded our way through the crowd, a conservatively dressed middle-aged fellow with a well-trimmed beard spoke me. “Are you two a couple?” he asked, gazing from me to my husband, both in our Sunday Symphony best.
“Yes, we are.”
He broke into a huge smile. “It’s so great to have people like you here in support! This is such a great day! I never thought I would see this day!” I didn’t tell him we were there for the symphony, but agreed with him and wished him a wonderful afternoon. “It will be!” he replied, as the crowd separated us.
The symphony performance was terrific – a first-time performance of a concert version of Leonard Bernstein’s “West Side Story”, led with gusto by Bernstein’s friend and protégé, Michael Tilson Thomas. The lead singer, a minor TV star named Cheyenne Jackson, has an amazing vocal range and great ability to sell a song. He was also listed in the Pride Guide as one of the Celebrity Grand Marshalls of the Gay Pride Parade.
At the intermission we wandered out to the balcony from which we could see a corner of the celebration still going on at UN Plaza. Traffic was at a standstill on Van Ness Avenue, and people in costumes, carrying balloons, flourishing signs, and holding hands were crossing below, waving up at the balcony-viewers. We waved back.
After the concert we made our way through the packed throng to the BART station. We passed a group of people dancing and shouting along with a rap group on one of the side stages. We passed another side stage where a cheerleading squad was performing acrobatic flips and pyramids. We saw black guys in blonde wigs and high heels. We saw white guys with buzz cuts and bright new Intel@Pride T-shirts. 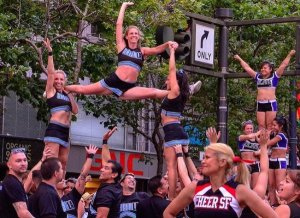 The BART station was solid people, a big friendly mob – no pushing, no elbows, just laughter at our common sardine-hood. We inched our way to the turnstiles where a guard was assisting people with Clipper cards – we made it through. I have never seen BART so crowded, but a young couple in cut-away jeans and pink tank tops jumped up and offered us their seats.
It was a party. It was raucous and joyful and raunchy and sweet. There are different opinions about the Supreme Court decision and about what marriage means, but it is hard to resist something that made1.5 million people so plainly, euphorically, unreservedly happy.