Maybe you have wanted to take your kids to the National Air and Space Museum at Dulles Airport in Virginia or the San Diego Museum of Flight down in Balboa Park.  Maybe you have been daunted by the distance, or the cost.  You can give them a good taste of the experience by taking them to Northern California’s Hiller Aviation Museum, just off the Bayshore Freeway in San Carlos, California. 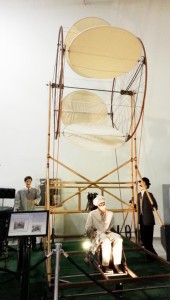 I had driven past this museum many times, but given the name I had assumed it would be all about helicopters. But when my ex-helicopter pilot brother was visiting recently with his young son, we decided to give it a look.  There are indeed helicopters, but so much more, including full-size models of early flying machines, a giant unmanned glider whose wings span the length of the football-field-sized museum, the cockpit of a 737, a walk-in exhibit of the full front fuselage of one of the first 747s, hands-on flight simulators, a widescreen Google Earth projection from which you can zoom in from outer space to your own front yard, and, on Wednesdays in the summer, your choice of goodies from a half-dozen food trucks in the parking lot.

In summer the museum also hosts a series of summer camps, so you might see a gaggle of ten-year-olds testing their experimental paper airplanes in the back patio, or a parade of backpack- toting sub-teens getting their introduction to flight simulation software in the Flight Lab.  As much fun to watch as to do!

The museum includes some special exhibits about early women aviators, Chinese-American aviation pioneer Feng Ru, and others you may not have heard of.

And of course there is a gift shop, stuffed with all sorts of magical flight related toys, model kits, and fluttering gizmos.  And the docents are enthusiastic volunteers with a lot of knowledge they are eager to share about the aircraft exhibits, some based on their own experiences of helping to build or fly the aircraft.

Admission is only $15 for adults, $10 for Youth and Seniors – you can get a coupon from their website for a $1 discount on Sundays.

Go ahead and indulge your inner daVinci, Wright, Lindberg, Earhart, or Yeager!