The weather was perfect: warm, no fog or wind, as we left Hearst Castle.

We meandered up Hwy. 1, ooh-ing and aah-ing alternately at the gorgeous scenery and at the huge scars on the hillsides marking the winter landslides of several seasons. South of tiny Gordo men were still working to clear a large slide – the influx of workers must have been a boon to the intesnsely cute Whale Watcher’s Café which dominates the one-block town. 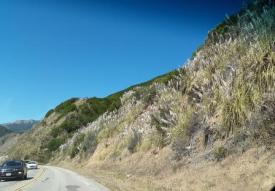 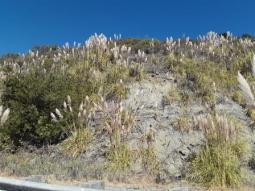 Fountains of invasive pampas grass flaunt their rusty pink plumes all over the scarred hillsides. It’s clear that they have gotten the jump on native vegetation, but one must be thankful for any roots that will hold back more landfalls. Not encouraging to start the trips with a sign saying “Rock Slide area – next 60 miles.

We snuck into the Los Padres National Forest’s Plaskett Creek Campground despite the signs saying “Campground Full,” and ate sandwiches and chips we had bought at the Hearst cafeteria/deli. The group camp, with a beautiful ocean view, was deserted at midday, except for a group of grackles generaled by jays which hovered ever closer to our crumbs. Then after our lunch, only about 500 yards further down the road we saw a sign for “Beach and Picnic Area”. Our lunch tasted better for being illicit, though.

Further up the road there was an even bigger slide, with an obviously temporary one-lane road perched nervously across the new ground. But it was fascinating to watch the big diggers roaming and scooping  atop huge mounds of dirt and stone. And that road remains a marvel of impossible engineering, spectacular vistas, and a maddening plodding pace behind the inevitable road boulder, often a “Rent-Me-RV” whose first-time RV driver is scared to death of his rig and the road.  And they won’t pull out to let the long line of vehicles behind them to pass, which is the law, or, if it isn’t, there oughta be.

And finally we made it to Big Sur, with its redwoods, its fire-scars, its resorts both humble and ostentatious nestled in the piney woods.  Only another hour of gorgeous scenery to go before we hit the traffic and tourists of the Monterey Peninsula.  It’s been a great ride.