Freeway Free in France: Looping back to Souillac

It was hard to tear ourselves away from our luxury hotel on the outskirts of Carsac this morning.  In fact, Winifred and Dianne failed utterly, opting to take the sag wagon with the luggage back to Souillac.  Turns out the pickup time was not until 3PM, so they had almost a whole day of lounging around the pool eating bonbons.

Meanwhile DM reconsidered her idea of a solo stroll, so the two of us set out promptly just after 9AM to regain the converted train right of way now known as “Le Voie Verte” -the Green Way.  This is a lovely hiking, biking and jogging path with a nice shallow grade going along past quaint little towns, distant castles, through tunnels, and along the Dordogne River.  We missed the first castle as the fog had not yet lifted, but compensated by exploring the next little town Aillac, a fabulously pretty little yellow Winkie village with some really cute cats and kittens outside a barn, and an amazingly clean set of public toilettes.   We hikers appreciate these things! 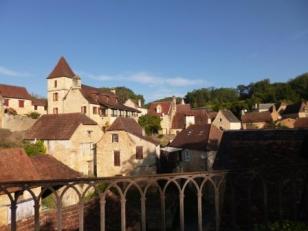 We made very good time on the Green Way, even overtaking and passing the Australian couple who had been besting us in previous days – however, we were not held back by DB and WB, and the Australians had made a wrong turn. We tried to stop for a snack at the halfway point, but the season had officially ended on the 19th, the snack shops were closed, and the one open restaurant was out of Coca-cola, Dory’s secret vice.

Once we ran out of Green Way, things took an upward turn – waaaay up to the top of a small mountain where we found the village of Millac, but were too exhilarated at being able to stand up straight and see for miles to spend time exploring yet another crumbling church.

Then it was down through dappled shade and dappled sun in a woodsy canyon, then down further through more dappled shade and dappled sun as we crossed a series of walnut orchards with beautifully shaped and spaced trees, then down further into the tacky outskirts of Souillac, then down past the cemetery.  We got confused, asked a passerby if he knew our hotel, and he pointed to it across the street.  Winifred and Dianne had just arrived. 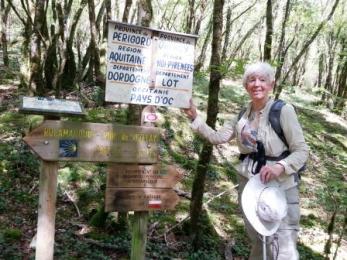 I took a short walk up down with Dory to locate a Coke for the train tomorrow, and we wandered a little bit more through the old medieval section of Souillac.  We were surprised to see that a small two story townhome in this section, with 2 BR, 2WC, and two other “pieces” which could be used as a “salon” or a BR, was en venue for around 135K euros – seemed a lot considering how many empty shop fronts we had been seeing.

The area is suffering from gentrification – so many wealthy Brits have bought old hones in the area and are restoring them, that housing prices are going up for everyone.  Sounds eerily familiar.

Tonight we expect another luxury dinner, but must leave early tomorrow to catch our 8:25 train to Paris.  Maybe we will spot Hercule Poirot.