Texas Freeway Stops on the Way to the Back of Beyond: Ozona 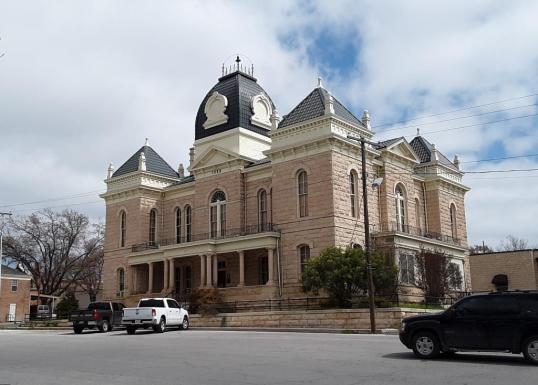 From Austin to the Big Bend country of Texas, you pretty much have to go by freeway.  But there are plenty of stops to be made along the way.

Ozona, Texas, is one of those towns whose reasons for existence seems to have evaporated, leaving only shells of former splendor, like dinosaur fossils, to evoke what once was.  Like many another small Texas county seat, it boasts an impressive courthouse facing the central square.  As a general rule, the vintage of the courthouse (in this case, late Victorian) is a good indicator of when the town was at its peak.

The courthouse, like many others, is a Texas Historical Landmark, attested by a plaque next to the front door.  The square boasts a statue of a pioneer family, in addition to a large memorial to Davy Crockett (Ozuna is county seat of Crockett County).  Judging by the style of the memorial, it was  probably installed soon after the coonskin cap craze of the mid-50’s. Probably predating the Crockett memorial by at least 20 years is a brave neon sign proclaiming Ozona as “The Biggest Little Town in the World”.

But the other buildings around the square belie the boast. There is a bank building with a beautiful classical façade, now boarded up.  There is a decaying three story hotel with a  vintage look, now boarded up.  The largest business on the square is a gun shop.  The second largest is a stockman’s supply store.  The third largest… well, I’m not sure among the many vacant facades which might have been open. 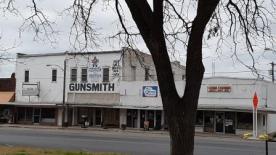 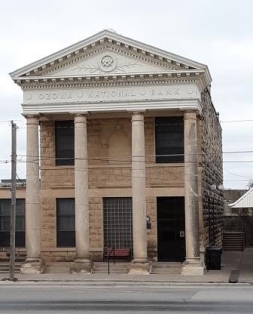 My name is Ozymandias, King of Kings;
Look on my Works, ye Mighty, and despair!
…. Round the decay
Of that colossal Wreck, boundless and bare
The lone and level sands stretch far away.

One thought on “Texas Freeway Stops on the Way to the Back of Beyond: Ozona”