A Piece of My Mind: Lost in the Cloud (Los Altos Town Crier April 2017)

I have been doing what amounts to an archaeological dig at the home my parents occupied for 60 years.  It seems as though every drawer I open, every closet shelf I clear holds traces of the life my parents led starting long before the time I began to exist. I am learning a lot about the people who raised me and how they became who they are. And I am also learning how much I can never know.

When my nephews cleaned out the loft in the garage they brought down boxes of heirloom china and heirloom linens and old tax returns and my mother’s scrapbooks from high school and college, beginning with birthday cards she received when she was seven years old from her father and the grandmother on her father’s side.

Now here is the interesting thing:  according to the stories about her childhood told by my mother, she had only fitful contact with her father after her parents were divorced.  Yet the scrapbook contains gift cards for birthday and Christmas from “Daddy” dated for seven un-interrupted years.  And there is nothing else in the scrapbook from those seven years except the gift cards. Then they quit. The scrapbooks contains all sorts of high school mementoes, but no gift cards signed “Love, Daddy.” My guess is that my mother kept and cherished the cards from her childhood until she started the scrapbook in high school. But at that point, did the cards and gifts stop coming? Did she turn against her father and grandmother and reject the presents?  If only I had found the scrapbooks before my mother’s death, so she could tell me more of that story.  But at least I have some of it, thanks to the paper record. 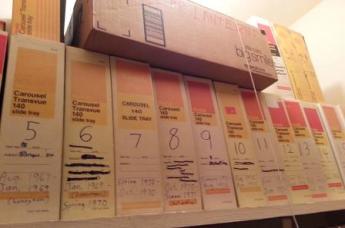 When my sister was putting together a slide show to display at our mother’s memorial, she discovered that there were almost no pictures of her or our younger brother after the ages of seven and five, respectively. She figured out the problem – at that point in the late 50’s or early 60’s, my father  switched to slide film.  Stored in the hall closet are at least a dozen slide carousels, each holding 100 slide transparencies. But who has the technology or the patience to sort through over a thousand slides in this digital age? Even the one shop on the Peninsula which once offered a service of switching analog slides to digital has closed its doors.

This gap in the record caused by lost technology has given me pause.  I have ten years’ worth of photos on my computer at this moment downloaded from various digital cameras, plus another thousand or so backed up from my phone onto Google Photos somewhere in the cloud.  But what will happen to those photos when I am gone?  Will anyone back up my computer before trashing it as obsolete? Will the photos continue to float around as little electronic bursts of static in the digital cloud forever, waiting for someone with the correct user name and password to unlock them again?

I did feel  that I had attained some measure of immortality due to my long relationship with the Los Altos Town Crier.  When I first started writing this column some years back, I searched the archive and found that the good old Crier had preserved mentions of me dating back to when I received an Outstanding Student Award in high school.  At least that part of me would survive.

But to my consternation, when I recently wished to check a date in my personal LATC archive, I found that the Crier is economizing, and  now only the most recent three years of the Life of Allyson can be accessed.  I guess there are only so many gigabytes in the cloud after all.

Fortunately, “scrapbooking” is back in style. When I am gone, the archaeologists will find the scrapbooks from my elementary, high school, and college years encased in plastic storage bins in the attic.  And the deep file drawer in the upstairs desk contains a newsprint copy of every single piece I have published in the Town Crier. I won’t be lost in the cloud, because I’m leaving a paper trail. 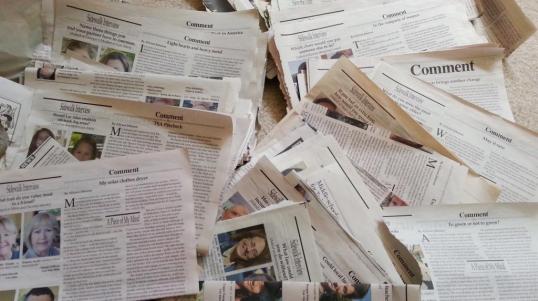