Freeway Free in France: Up and Down along the Dordogne 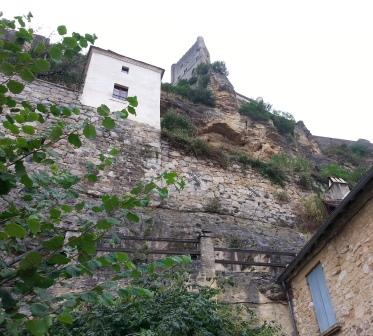 This day was the scenic highlight of our walking – we stayed the previous night at Beynac, beneath the cliff topped by the medieval fortress which we had wandered through the afternoon before.  After our breakfast of croissants, cafe au lait, and local yogurt and strawberries, and after wrestling our luggage down three flights of narrow stairs, DM, DB, and I set out along the “grassy track” by the Dordogne River.  (W has developed a painful knee after too many ups and downs and decided to cop a ride in the van.). The path led along the river through woodsy patches – lots of bird calls, some families of ducks on the water, the occasional fisherman, the occasional egret.  We stayed mostly level through a series of acricultural meadows and fields (DM sampled the sunflower seeds, I sampled the fresh asparagus spears pushing up from the ground) and took turns pointing out the yellow sandstone castles on the successive cliffs – Beynac behind us, its hated rival Castelroud across the river on the English side. 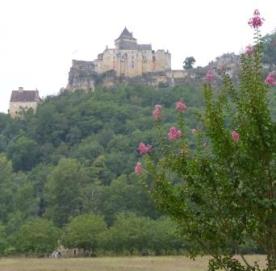 We continued past Montingnac and a couple of others unnamed in our guidebook, ending with Roque Gageac where we broke for lunch.  This is a point where the cliffs come almost to the water, and the oldest homes are carved into the Rock faces – “troglodytic  dwellings” per our guide.

DB stopped at a sandwich/boulangerie shop and ordered a panini with ham and cheese. I watched in horror as the young man took a perfectly lovely baguette and squished it flat in one of those icky panini presses. Yuck. We picnicked at a quiet park next to the little quay and watched the tourist boats plying the river.

Then began the up and down part which had intimidated W.  First we went up “Banana Alley” to admire the work of a gardener who had learned to grow exotic fruits and plants along the south facing sheltered cliff – very lush and lovely, then further up on narrow roads with improbable “parking privee ” signs posted on narrow ledges next to elegant and not so elegant sandstone homes, some of them evidently refurbished antique dwellings, others more modern knockoffs, but all of the same glowing yellow stone.

We snaked up along the angles of the woodsy cliff side, mostly following an ancient stone wall held together by moss and ivy, and finally came to the top where we had our first view of Domme, perched on the top of a distant cliff on the other side of the river. Then down past more elegant farmhouses and homes, some with old ramparts and fortifications still, now on “Tarmac roads”, crossing the river on a narrow bridge with an even narrower sidewalk- only one km to go!

But what a kilometer it was, up and up and up in almost the only full sunshine of the day, stopping at every patch of shade and every wayside bench, til we finally reached the medieval gateway with its arrow slits to use against invaders still intact.  The hiking guide led us straight up to the central square, a knockout view, and our elegant hotel right there on the edge of the bluff.  Our room has a view out over the valley, a fitting reward at the end of a day of wonders