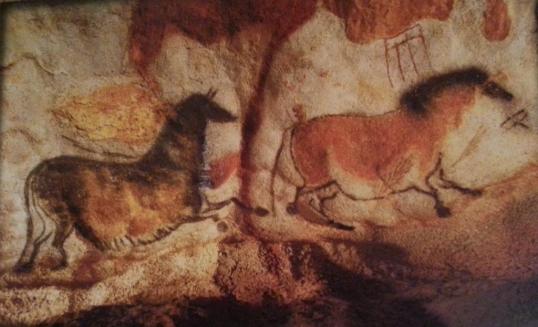 The Dordogne area of southwestern France is rife with sandstone caverns, many of which hold spectacular displays of calcite formations, and several of which hold samples of Paleolithic art, most preserved unseen for over 20,000 years because the entrances to the caves collapsed, cutting off access.

We first went to Peche-Merle, where the art and other man-made markings have been dated back to about 28,000 years.  Here one is allowed to descend into the actual cave, which has been artfully illuminated to simulate torchlight on the drawings.  The calcite formations are dramatic – curtains and columns and needles and disks and strange formations that look like children’s toys – a spinning top, a set of marbles.  All done by seepage of water through the calcite.

Most of the drawings are linear evocations of mammoths, deer, and aurochs with one sweeping line outlining trunk, tusks, head, hump, and tail.  There is one very clear image of a cave bear scratched into a wall with some relief effect due to the bumps in the wall.  There are several partial hand prints.  There is one image of a man who appears to be pierced by spears (images of people, we learned, are very rare in Paleolithic art.). And at the end there was a spectacular image of two horses, both with small heads, black fore quarters, and black spots on the rest of the body for an Appaloosa effect, the most complete and vivid picture in the cave.  We tried to imagine how these pictures were created, by artists using pigment made from burnt clay, stamping or brushing or even blowing the colors painstakingly onto the wall.  The how of doing it is hard to imagine, the why is a complete mystery.

The next day we went to Lascaux II. Fifty years ago  my group of American students was among the last visitors to the original cave, as it was closed to the public in 1963, the year I was there.  The re-creation, however, does a much better job of recreating the sense of being in a cave, the mystery and unknowability of the purpose and practice of the artists, and the general overall experience than, say, the digital recreation of Alta Mira in Spain that  I saw two years ago (See my blog post from 2014). Again, one descends underground, into a cavern whose dimensions and irregularities are within one centimeter of the original cave.  The paintings have been recreated copying the original pigments and techniques.  And what paintings! Horses walk, trot, and gallop in a frieze, herded (maybe) or protected (maybe) or stampeded (maybe) by several gigantic bulls. There is a delicate drawing of a deer with intricate antlers alone on one wall.  There is a procession of ponies.  There are ibexes with sweeping horns.  There is one animal which seems to combine features of several others.  And many of these animals are carefully and realistically shaded and colored, unlike the outlined figures of Peche Merle.  They are beautiful.  No one knows, or can ever know, what they mean. 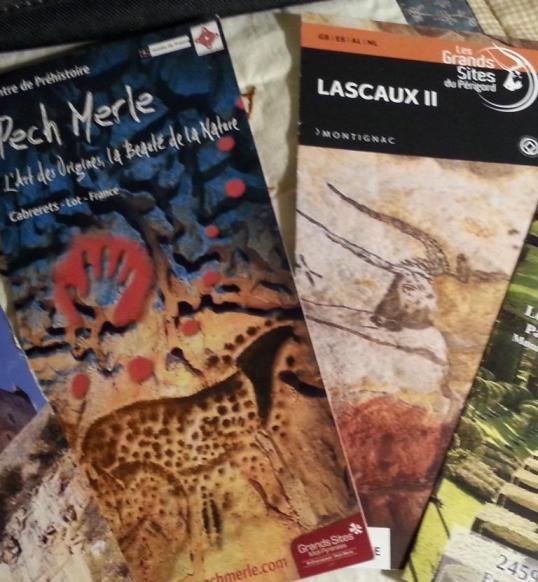 3 thoughts on “Freeway-Free in France: Paleolithic Art and Mystery”