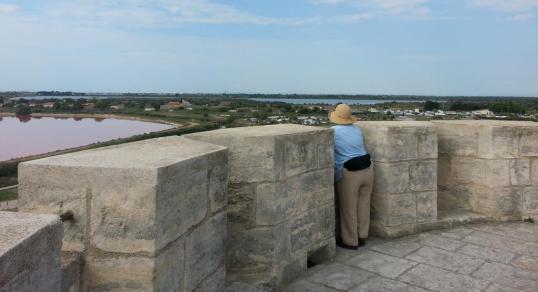 We spent most of Day 5 in Aigues Mortes ( “Dead Waters” in Provençal), a town which was extensively fortified by Louis IX (later St Louis) back when he was extending his kingdom south and needed a Mediterranean port.  Unfortunately, the port location was badly chosen, the harbor kept silting up, and eventually Louis conquered enough of Provence to make Marseilles his lead port, leaving Aigues Mortes to molder neglected at the end of a rather barren peninsula.

Neglect means no development, so the medieval town, with its defensive wall, royal apartments, and battlements are all pretty much intact, despite some quarrying of the walls to build more modern edifices (pig sties, sheep pens, etc.). Later when the Huguenots were being suppressed by Henry II, a number of them were imprisoned here until they would renounce their heresy. Some stayed for 35 years until finally freed by Louis XV.  Still later, imported Italian workers being exploited in the nearby saltworks were cruelly suppressed by the French authorities – some striking artworks made of salt crystals commemorate the injustice.

The day was quite warm, but a nice breeze off the sea and a number of displays, educational materials, and art projects located in cool interior rooms make our tour of the battlements very pleasant. We stopped for ice cream on the way out of town, and Chantal located a boulangerie which sold fougasse, a kind of Provencale specialty bread  made with olive oil, olives, and bacon bits, which I had heard about and wanted to try.  Yummy greasy flaky rich.

That evening the five of us went out for a seafood dinner at a little harbor town near Lunel.  On a Saturday night the place was jumping, with each outdoor restaurant competing with the next in loudness and variety of bands (mariachi, hip hop, rock, all going noisily at each other across the canal.). It was not exactly the quiet atmospheric dinner we had expected, but it was certainly a change of pace.