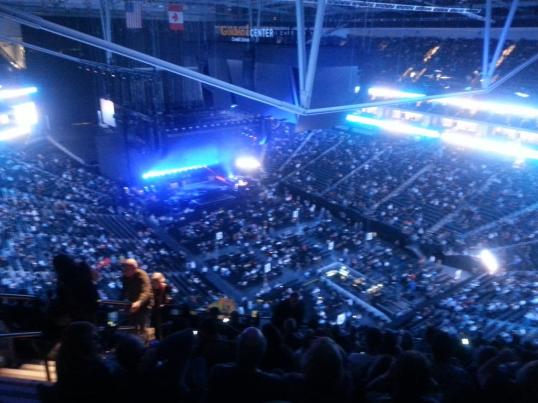 “I feel like I’ve been listening to the sound track of my life”, my sister sighed blissfully.  We were side by side on the bus riding home from Sir Paul McCartney’s concert opening Sacramento’s Golden One Arena.

For two and a half hours Sir Paul had delivered the goods:  a heavy dose of Beatles tunes ranging from “Love Me Do” to “Let It Be”, and some songs from the Wings years, and some which post-dated Wings.  The audience of over 15,000 had happily sung along  with “Obla-di, Obla-da” and endless repetitions of “la la la lalalala, lalalala, Hey Jude”.

Thanks to giant Viewtronics screens which zeroed in on the musicians, it didn’t matter that our seats were in the absolute last row of the highest level, and that the actual performers appeared to be the size of ants crawling on a stage the size of a postage stamp far below.  Our aerie gave us a great view of the audience participation (arms and lights waving in synch to the music all around the arena) and the special effects (rear-projection screens, animations, laser beams roaming the audience,  confetti shot from cannons, fireworks going off in rhythm with the music from the front of the stage.)  It was a far cry from my previous rock concert, which involved maybe 2000 people at the San Jose Civic Auditorium to see a rising bad-boy British band called the Rolling Stones.

What my sister said was true for her.  One of her most vivid memories is of the Beatles first performance on the Ed Sullivan show, when her scream at their appearance caused me, emptying the dishwasher, to drop and break our father’s favorite coffee mug. When she was thirteen, my forgiving father had taken her and three of her friends to a Beatles concert at the Cow Palace, taking turns lifting his quartet of  hysterical 13-year-olds on his shoulders so they could see .  She remembers exactly where she was when she heard the news, as an earlier generation remembers where they were when Kennedy was shot, and a later generation remembers the day the Challenger exploded.  “In My Life” was one of the introductory songs played at her wedding.

For me the Beatles would also be on the sound track, but there would be others also.  Earlier on the track I’d include the Mormon Tabernacle choir whose broadcast from Temple Square filled our house each Sunday morning, as did the Metropolitan Opera broadcast on Saturday.  I’d include the scores of  Rogers and Hammerstein, and Gilbert and Sullivan.  I’d make room  for Dorothy Shay and her Park Avenue Hillbillies, a corny old vinyl set which as kids we played over and over again on our console record player with the automatic changer.

Later there would be folk music from Joan Baez and Judy Collins, and the rough poetry of Bob Dylan (now Nobel Laureate – who knew!) And still later the epic movie music of John Williams: the themes from “Star Wars” and “E.T” and “Indiana Jones” and “Superman.”

And maybe at the end I’d come back to the Beatles: