Freeway Free in France: Ambling around Arles in Vincent’s Footsteps

This morning DM was picked up at 9″30 by her Swiss cousin and his wife who happen to live about a half hour from Lunel.  Right afterward the remaining four of us set out for Arles, known for its Roman ruins and former resident Vincent Van Gogh.  We saw a lot of both.

Once we got to Arles and rather miraculously found a free parking space that I could maneuver into, we headed first for the Bureau Touristique for city maps, and then, at WB’s insistence, went first to the Fondation de Vincent Van Gogh, which was sponsoring a special exhibit of Arles’ favorite summer tourist. C scoffed “This isn’t Paris!  There will be no queue!” But there was one, and a twenty minute wait for tickets.  Rather than retrace steps, we shifted our plan of saving the nice air conditioned museum for later in the afternoon and plunged into three rooms of I would say B-level van Gogh’s on loan not from the Rijksmuseum but a less prestigious Vincent van Gogh museum in Amsterdam.

The only well known work on view was the one of fishing boats on the beach.  It is a beautiful work.  There were a couple of others that I wouldn’t mind having on my wall, and a couple that I would NOT want to display  too dark and foreboding. Once out of the museum (including an ascent to La Terrace, with a wonderful view over the rooftops of Arles) we discovered we were starving.  We tried a couple of places with recommendations from Michelin and Routiere but found them with no available places, and ended up rather serendipitously at la Cafe de la Nuit, which was famously painted by Van Gogh, and which I had used as a focus point for one of my Lamaze experiences.  The lunch was better than expected, service snail like, but the locale could not be beat! 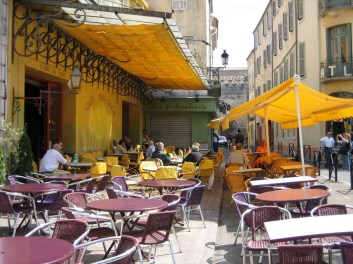 We rounded out our VvG experiences with a visit to l’Espace Van Gogh, which is the asylum to which he repaired after falling out with Gauguin and cutting off his ear.  It is a lovely enclosed space with a garden that blends the formal French garden with an Impressionistic flair. It is now a tourist center with one of the world’s greatest collections of postcards, and tour groups ebbing and flowing constantly.  I had to wonder whether the current buildings are painted as they were when Van Gogh was there or painted as he painted them (not necessarily the same.) Then we started our Roman ramblings. Maybe it would be good to consign that part of the day to a separate email.

3 thoughts on “Freeway Free in France: Ambling around Arles in Vincent’s Footsteps”