We started off at a good hour for our expedition, arrived at the station in plenty of time to catch the 9:20 train, only to find that it was sold out. Next available train on a busy commute and tourist day was at 12:20. Scratch.

We went back to the hotel by Metro to save energy, I said something about our failed plans to the desk manager, and he replied quickly, “Why not go by bus?” Turns out the express bus leaves every hour, from a station about a half hour away by Metro.

With one thing and another we got to the bus station in time for the 11 AM bus and we were in Toledo by noon. A wonderful town for traipsing around.

We started with the awesome (in the original sense) cathedral, a soaring flamboyant Gothic/Baroque structure on the outside, with a wonderful Last Supper going on in sculpture across the front above the main door. If you look at it from the rise of steps across the plaze, you can see down onto the table where the sculpture was careful to provide both bottles of wine and a plate of rolls as required.
On the inside more of the same – a LOT more. In addition to the profligate use of gold from the New World to decorate altars, clothe icons, and create 10 foot-tall monstrances to hold the Host between communions, it contains more great paintings than they have room to hang or light or even identify decently – a whole set of Christ and the apostles by El Greco hung kitty corner to the viewer behind a grate, Titian, Correggio, and Rembrandt hung in a half-lit chapel on a temporary scaffold in front of the altar and again behind a grate.

The most awesome thing about the Toledo Cathedral is the detail – everywhere you look there is an artwork that would be worthy of its own exhibit in any other context.  For example, this mosaic of John the Baptist with his young cousin Jesus – at least 30 feet tall over the door of the cathedral – not even mentioned in the audio guide or anywhere else – but so powerful!

We got halfway through the audio tour and elected to pause for lunch at a vegetarian restaurant Winifred had located online nearby. (We are on a veggie kick since being greens-deprived in our first day in Madrid.) There are good and bad veggie restaurants – Madre Tierra  was excellent – a wonderful salad and then a cream of spinach soup so thick and rich I could have eaten it with a fork. 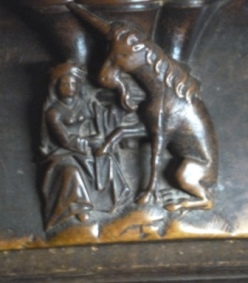 Then back to the cathedral for the rest of the tour of amazing carvings and sculpture.  (See some of the amazingly evocative carvings in the choir stalls above)

The art highlight – the Sacristy- was closed for renovation, which was probably a blessing in disguise. Otherwise we would never have made it to the El Greco Museum, which had a different set of apostles, much better displayed, hung in a setting designed to recreate a 15th century home such as El Greco might have lived in during his time in Toledo – quite charming.

Back to the bus, stopping for Winifred to pick up some mementoes and gifts. The express bus was full, so we took the milk run, whistle-stopping through a series of villages and small towns, letting off matrons who had been shopping for their week’s supplied in the supermercados of Toledo, taking up young people who had been visiting their families for the holiday and were headed back to Madrid – it was fun to make up stories to explain the meetings and partings. 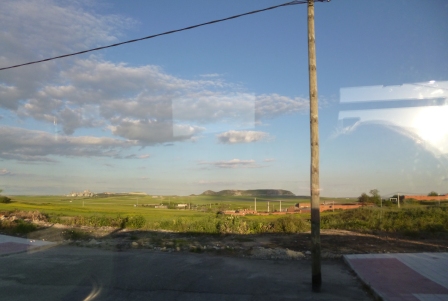