I was apprehensive about the road to el Parque Nacional de los Picos de Europa, the high peaks of the Cantabrian Mountains which burst out of the plains about 100 twisty KM from our base at Aguilar de Campoo.  In fact,the road was much better than my imagination had envisioned, parts were beautifully kept, and all had marvelous scenery that made us think we must have teleported to Switzerland or the Italian alps.

We drive through beautiful green valleys carpeted with wild daffodils, dandelions, and other white and yellow flowers.   The pastures are occupied by plump unshorn sheep with their new white lambs, plump silky looking cattle with impressive horns, plump draft horses with new foals either just born or about to be.

We go through spring all over again each time we descend from a pass where winter still shows snow and sere branches, down to the green valleys foaming with blooming peach and wild plum trees. Wisteria vines, roses, and calendulas  bloom in farmyards whose yellow sandstone homes were probably built in the 14th century.

Above the green valleys soar snow covered peaks rising up 3000 meters and more. At the end of our drive is the Fuente De, a cul de sac at the end of the road from which we ride a funicular up 1800 feet to the top of one of the peaks, passing waterfalls on their way down, looking an eagle in the eye as he swoops past, and alternating ooh’s and aah’s with frantic picture taking. At the top of the funicular is a 360 degree view of green valley, snowy peaks, and cascading waterfalls.  An eagle flies beneath my feet on the see-through viewing platform. 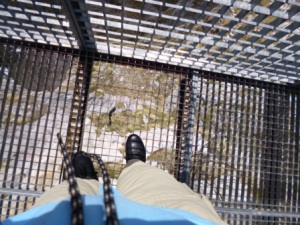 Signs point across the snowfield to a trail which leads down to the valley.  We watch an intrepid bicyclist begin the trail – before long he is carrying his bicycle through the knee-deep snow.  I hope he made it to the bottom.

We descend via funicular and return to the town of Potes, which is the tourist center and activity start point for the southwest side of Pico de Europa.  We want to take a hike, but miss any trail markers there might have been, and end up taking only a half hour walk up a slope to a spot shaded by pine trees. We sit on a broken pallet, eat our indifferent apples, and admire the stupendous view.

My neice Jen says the joke in the region is that every small village has its Romanesque church, its plaza, and its idiot.  We pass through at least a dozen villages on the way back, each church in its plaza more picturesque than the last.  We don’t spot the idiots, but they were probably picturesque also.