If you are traveling from Edmonton to Vancouver, you go through mountains.  If you are on the Rocky Mountaineer, the luxury tourist train, you are promised that you will the mountains in daylight.  The first day you see the Canadian Rockies.  The second day you see the northern Cascades.  And in between  you have to stop somewhere.  That would be  Kamloops. 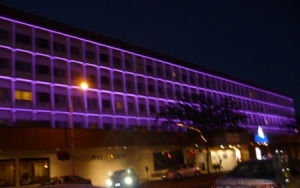 After the historical majesty of Banff Springs, Kamloops is barebones, down-to-earth, and offers everything you need for a one-night stay.  There are at least two hotels with serviceable accommodations (we stayed at the Thompson).  There is a downtown, which features a brightly lit library and an even more brightly lit casino run by the Indian tribe whose reservation is across the river.  It is summer, and there is a college in Kamloops, so there is a lot of life on the streets even though it is mid-week.

Riverside Park just over the railroad bridge sits at the confluence of the north and south branches of the Thompson River. Historically and pre-historically, the river has been even larger:  a marker at the edge shows the height of the river during several 20th century floods (Ankle, knee, and waist- high lines), during prehistoric times (head-high) and during the epochal flooding of 1894 (about twenty feet up there).

The park features lots of rolling lawn, graceful trees, a sandy beach, and a bandshell where free music concerts are given every night of the summer season (Heavy on the country-western genre.) Thanks to the balmy temperatures and the slow-moving river, it also features economy size mosquitoes, which limited our attention span for the concert. 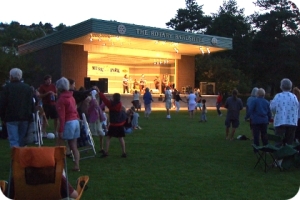 We strolled back from the park past a pizza parlor overflowing with families, an ice cream shop overflowing with children (including one practicing with a hula hoop). From the turn of the century opulence of the Banff Springs Hotel we had time traveled all the way to the 1950’s., We settled for dinner at The Noble Pig brewhouse, where the modest cuisine was considerably enhanced by the friendly service and outdoor dining.   I expected to see Ozzie and Harriet at the next table, with young David and Ricky fighting over the last piece of pizza.

3 thoughts on “Canada: The Alien Next Door – Day 6 (continued) – Kamloops”