Canada to me has been like one of those neighbors who lives quietly, keeps their yard neat and their picket fence painted, says “Hello” and “Good morning” when appropriate, but who has never invited me into their house.  This summer I got past the picket fence and at least caught a glimpse of the family room;  my husband and I went for a trip across the Canadian Rockies by bus and by rail.  In many ways we traveled in a bubble of luxury tourism;  still, even the part visible through the bubble was much more exotic than I had imagined.  There is a lot going on behind that picket fence. 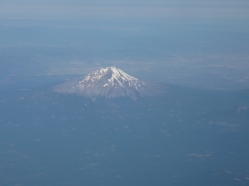 On a sparkling day we flew northeast from San Francisco, flying over Mt. Shasta – America’s Mt. Fuji – stark and snow crowned alone in the middle of the flat-for-miles-around north Central Valley.  Further north, the  Three Sisters  and lonely Mt. Bachelor edged the dry plain of eastern OregonI had never realized the extent of the mighty Columbia River – our route echoed the course of this huge waterway twining its way across Oregon and up into Canada, looking like a Great Lake in flow.

Once past the Coast Range and the semi-desert of eastern Oregon, we flew over the orderly square acres of Alberta.  The farm plots and roadways seemed to be marked off along the original homesteading lines, many with an irrigated green circle  tangentially inscribed percisely within the square of boundary roads.

The Edmonton Airport – vast and empty.  A young woman passed us on the moving sidewalk, asked us our business in Edmonton, envied our Rocky Mountain railroad trip, said “I’m just here for a funeral.”

“Well at least you must know the area.”

She shrugged and said dismissively, “ Edmonton is kind of like Sacramento.”  She moved past us at a more rapid clip.  I mulled over what she had said and thought: even if this is true,  that’s not such a bad thing.  I’ve spent a fair amount of time in the leafy parks and rose gardens of Sacramento, bicycling its river trails and enjoying its street scene – “Like Sacramento” is an ok thing for  a capital city of a thriving province to be.

I was to find out that Edmonton is not so much like Sacramento, despite having both leafy parks and rose gardens, as it is like Houston (see my earlier posts).  Something to do with oil wealth and explosive growth, neither of which I had known was a factor in Alberta.  My elementary school geography showed the map of Canada with its chief exports – Alberta featured a shock of wheat and a cow.   Now the province would be pictured with an oil derrick and a coal car – who knew?