From Russia with Mom – Day 12 – Copenhagen

In my previous post I mentioned that Copenhagen is home of the Tivoli Gardens, the inspiration for Disneyland.  The whole city has somehow taken on this aspect – there is the Little Mermaid statue in the harbor, now inextricably linked to the Disney movie rather than the Hans Christian Andersen tale.  There are the fairy-tale his-and-hers palaces for the Good King and Queen, complete with toy soldiers guarding them.  And there is ice cream. 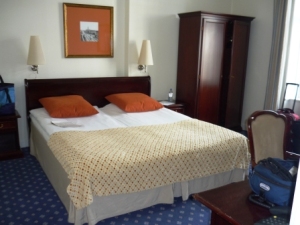 I’m ensconced on the fourth floor of the Grand Hotel in Copenhagen. It was probably grander in former days, but it is certainly nicely located very near the train station and Tivoli and the famous clock. We had a bus tour of the city including the obligatory stop at the Little Mermaid statue (which actually you could see from our boat this am), a couple of palaces, and lots of medieval towers. The bus dropped us just around the corner from our hotel at the Radisson Blu (formerly the SAS Royal – still has the old signs).

We tried to lunch at the Ida Davidsen restaurant that friends had recommended but our concierge checked for us and it is closed for vacation until July 7. So instead he recommended Frk Barners Kaelder – a restaurant about two blocks away where we were able to enjoy some stupendous Danish open-face sandwiches in the company of a huge tableful of huge Danes all drinking Carlsberg by the tankard and passing around platefuls of herring, fried fish filets, and lots of condiments. Very fun, except Mom had a hard time dealing with the openfaced-ness of the sandwich.

While Mom was napping  I went over to the station two blocks away to get some kroner for the evening. The neighborhood is a bit dubious – the train station is surrounded by dozens of freshly refurbished “boutique” hotels with Danish design furniture and orchids in the lobbies, but also there is a generous sprinkling of sex shops and strip clubs.   I resolved to get to Tivoli early, find some food, admire the lights, and return decorously to our hotel via the busiest and best-lighted streets.

We walked out of the hotel intent on a scenic stroll; I took a wrong turn at the Hard Rock Cafe and the stroll turned out to be a bit too long – By the time we got to the scenic shopping streets Mom was already worn out and ready for her preprandial cordial. So we hiked back to the Library Bar at the Copenhagen Plaza Hotel by the RR station which a cosmopolitan friend  had touted as “One of the top 5 bars in the world” per Malcolm Forbes. Well, shucks – the bar was pretty and cozy and dark and lined with books and leather armchairs, but the service was so poor they ended up comping our brochetta out of embarassment, and the list of available drinks did not include any Canadian whiskey or Crown Royal, so Mom had to make do with Makers Mark on ice.

We then went to Tivoli, which is indeed charming with its thousands of tiny glass lanterns and interesting buildings – we oohed and aahed and had some authentic Danish rhubarb ice cream, ran out of steam and returned to the hotel and bed by 9PM.

So…Copenhagen – a kind of vanilla experience.  A nice king and queen, pretty national monuments, quaint old architecture, vibrant new architecture, but you can’t get to know a country from a bus. I felt more of Copenhagen in my 10 minute brisk walk to the train station to exchange money than in four hours of bus tour with photo stops and another two hours of shuffling along in step with Mom.