The ecology and culture of the area has changed completely.  Instead of blue guesthouses haphazardly cleaned and decorated with marigolds and Hindu shrines, we now have gleaming whitewashed homes with wood (a sign of wealth) piled on the roofs and Buddhist stupas appear at the entrance to each tiny town.

Instead of banana trees we are now passing apple orchards, with the cored and peeled apple rings hung to dry on racks above the houses. (Question – why don’t birds eat them?  Why aren’t there roof rats or other rodents to wreak destruction? Maybe the apples are exotic and the local fauna doesn’t recognize them as edible? A mystery.)

We had a lovely morning walk along the glacial green Kali Gulkhari river, encountering a group of German mountain bikers who enjoyed barreling across the suspension bridges.  Then a tea break amid the apple orchards.  The guides sorted through a bushel of apples and bagged the best to take with them – because area transportation is so spotty, these apples will be greeted as a luxury back in Pokhara. 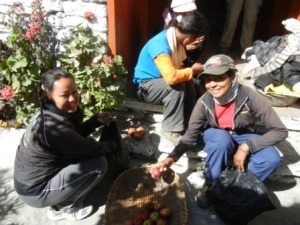 Then came a stretch of flat gray desolate land along the flood plain of the Kali Gulkhari: we crossed its tributaries on stepping stones and log bridges, waiting our turn with the oxen. 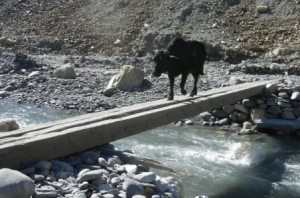 By the time we rejoined the bus road the wind and dust  were picking up along the river.  We left DB, one of the assistants, and all the large packs at one of the small villages  to catch a jeep to Marfa while DM, the other three guides and I pressed on.  We spotted DB’s jeep coming and I struggled with my trekking poles, grit in my eye from the wind and dust, and my camera in my right hand trying to take a picture;  a sudden gust of wind seized my trusty Monterey Kayaks hat and swept it over the parapet and at least 100 feet straight down.  Rats!

I used my Biffie to shield my scalp for the rest of the day’s walk, wide brimmed sunhats being scarce at the Tibetan craft shops on the way to Marfa. 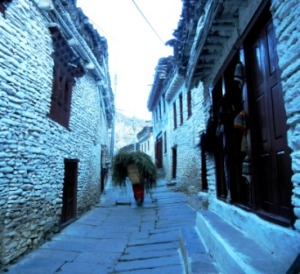 We reached Marfa just as the sun was setting beyond the mountains, leaving the town in dusky shade (and giving an unreal blue tinge to my photos.  The white-washed stones and pale cobbles contrast with the heavy dark doorways and windows;  the streets are so narrow that the houses seem to loom over the passersby.  Where the  casual litter of towns on the lower level leds to a feeling of  congenial informality, in Marfa and other high-elevation towns there are communal sanctions for any shopkeeper who does not keep his shop in order and his share of sidewalk swept and neat.  Even the dogs are well-behaved.

The guest house at Marfa gave us a lovely large room with big windows looking out at the mountains. 300 steps up from the guest house was a Buddhist monastery, with a lavishly painted shrine, cubbyholes for storing ancient religious scrolls, prayer flags fluttering everywhere.  But there are only 20 or so monks in residence – it is  hard to keep them, we were told – the young men keep leaving for warmer altitudes, busier throughways.