For years the inscrutable gray monolith  had loomed over us from the summit of the forbidden mountain.  Now the curse has been lifted, the prohibition ended – how could we not hurry to visit the newly opened summit of Mt. Umunhum?

When I moved to the Peninsula  Mt. Umunhum was an off-limits Air Force Base, directing the surveillance of the wasp-tailed submarine chasers flying out of Moffett Field.  With the end of the Cold War the summit with its surroundings was purchased by the Mid-Peninsula Open Space Trust (Midpen) , but it was still off-limits, poisoned by toxic waste left from its radar and other installations. The Loma Prieta earthquake in 1989 damaged the radar tower, making the location still more hazardous.

Then a controversy prompted action. In 2009 Midpen obtained Federal funding to clean up the site, and one of its first ideas was to tear down the remains of the radar tower and restore the site to its pristine pre-Cold War state.  Valley residents erupted with letters and meetings – the tower was ugly and dilapidated, but it was an icon none the less, part of the Valley’s landscape and history for 60 years, and we didn’t want it to disappear without ever having had the chance to visit it.

Midpen back-pedaled, but the residents were now energized.  We passed a bond measure which enabled the site to become a destination, with paved access roads, parking, restrooms, and all the other amenities expected of a public park.  And in September of this year the gates were opened.

Exalted Personages were there on the first day to cut ribbons and make speeches.  But on a weekday of the following week, we made the trip, feeling like pioneers as we drove up and down Hicks Road into an area of San Jose we had never visited before. Finally we reached a STOP sign, and on the right the gate to the newly opened park, now christened “Sierra Azul Preserve”- the blue mountain range.

The wiggly black arrows on the yellow signs are not to be ignored;  this is a seriously winding and steep road, requiring downshifting to second gear both coming and going. But as we ascended, our conversation went roughly

as the views of valley, mountains, and ocean began to come in sight.

At the top, the view expands from a misty Mt. Tamalpais in the north well past Morgan Hill to the south, from Mt. Diablo and Mt. Hamilton to the east to the gleaming ocean west of Santa Cruz.  Far below are the toy skyscrapers of down-town San Jose, the parquet of roof-tops carpeting the suburbs, the tiny white pyramids of the Shoreline Amphitheatre, the blue Lexington and Almaden reservoirs, and miles and miles of woodland and pasture and empty air.  Everything human-made looks extremely small and insignificant.

Everything, that is, except the tower, looming now right next to us, still inscrutable, and still closed to public access.

The park service has added a lot of informational signs about the mountain’s history. (The name, by the way, is an Ohlone word meaning “resting place of the hummingbird.”) 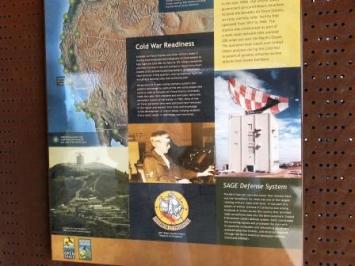 Some pointers if you go:

·         Watch out for bikers coming and going.  This new mountain road is a biker magnet, and the shoulders are narrow to non-existent.

·         Parking at the very top is reserved for handicapped.  There is a circle to drop people off, but unless you have a blue tag park below the summit at the restrooms.

·         There are 159 steps to the summit, punctuated by frequent landings with benches where you can sit, admire the views, and catch your breath. 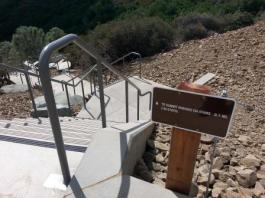 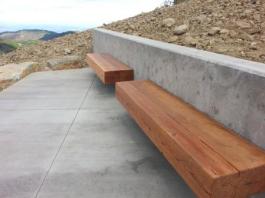 ·         There are two picnic tables under a shelter just below the parking lot.