Freeway Free in France: Hiking in the Dordogne – Day One 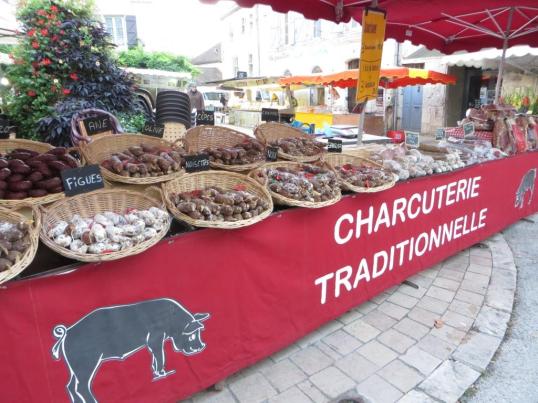 W and I are in our shared room decompressing after our first day hiking in the Dordogne.  The day started out well, with a street market going full blast out our window, a good night’s sleep after our six course kickoff dinner the evening before, and a good assortment of stuff on the buffet table at breakfast suitable for stuffing into a surreptitious bag for lunch. 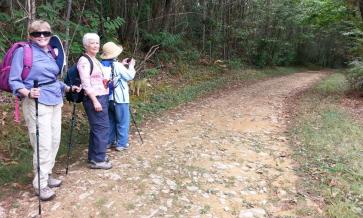 We were dropped off in Roufillac after a brief orientation on French hiking route markings, and told to “go between the houses and up the path”.  Packs on back, hiking sticks in hand, we set off.  The sky was partly cloudy, the temperature was in the low 70s, couldn’t have been nicer for our purposes.  We wound up through wooded hills past houses and barns built of glowing yellow sandstone, some with tile roofs, many with stone roofs.  We came to a small village perched at the top of the hill and realized we had climbed quite far, and there was a ruined castle inviting us to explore just at the tip of the cliff overlooking the valley. 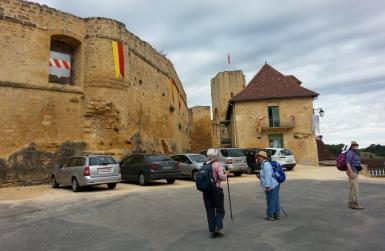 Some of the ruins were Roman, some 12th century, some newer. The castle had been a stronghold against the Gauls, the Huguenots, Charlemagne, and the Moors at various times.  This day, two friendly and muscular young men were busy setting up the stage for a music festival inside the keep starting this weekend.

We continued on down into the valley and up the other side.  By this time the air was warmer, and we stopped to take off our jackets and have our noontime snack of bread, cheese, and fruit from the hotel buffet.  We were already starting to keep track out loud of how many kilometers we had come and how far we had to go – a bad sign. But we felt good, and eager to see what would be coming around the next corner. (To be Continued) 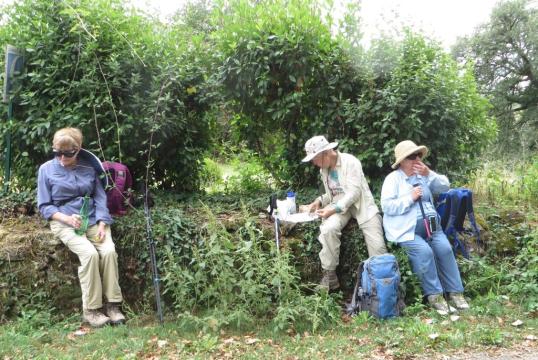 One thought on “Freeway Free in France: Hiking in the Dordogne – Day One”