Immigrants in the Capital

One of our leading politicos has gotten a lot of publicity in the past months by characterizing a group of immigrants to this country as “rapists, thieves, and drug dealers.” Since my great – grandmother came from Australia, where the first white immigrants were transported convicts – rapists, thieves, and drug dealers –– I am a little bit sensitive on this subject. So on my recent trip to Washington DC I paid particular interest in the impact of immigrants to our nation’s capital.

After a long day of exploring the National Mall, the National Holocaust Museum, and the Museum of Native American History, we welcomed an easy walk across the street from our hotel to the Café Park, deciding to sit outside under the umbrellas fronting Pennsylvania Avenue, where we could people-watch.  By the time we had begun to check out the menu, the humidity had resolved itself into a gentle rain, but we stayed out under our umbrellas as the air turned cool and fresh. 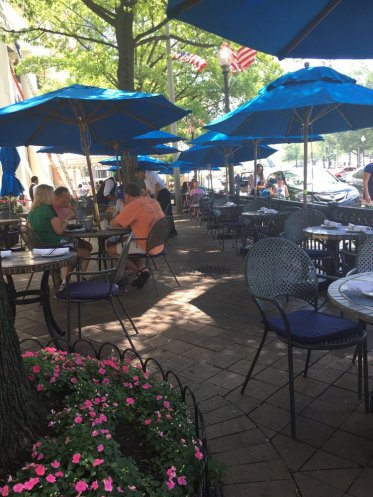 Our server dodged raindrops to bring us our wine and our entrees.  She had been in the US only fourteen months, had been “so homesick” for Viet Nam at first, but then found  a room with a Vietnamese lady who had become her “second mother.”  She hoped to earn enough to bring her own mother over for a visit.  Her enthusiasm for her work and her prospects was enough to sweep away the rain.

We enjoyed our evening so much that we returned the next day, hoping to have the same server.  Though she had been reassigned to a different table, she came over to say hello and commended us to our waiter, a sturdy and attentive young man from Lebanon.

The next evening after dinner we went out to the Mall for an evening visit to the Lincoln and Viet Nam Memorials.  These are the nearest things to national holy shrines that our secular society acknowledges.  At the Viet Nam Memorial the visitor descends below the level of the Mall along a black wall listing all those who died.  Here I did have to admonish one immigrant/tourist – a young lady who was chattering loudly in Chinese on her cell phone as she descended into the memorial area. “No loud voices!  Show respect!” She stared at me, confused, then bowed in embarrassment at her faux pas. 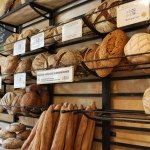 We stopped in between museums at Le Pain Quotidienne, thinking a French bakery would probably offer a good sandwich.  Our waiter was young and dark-skinned, with a flashing smile and an air of pride in his ability to remember our orders and deliver them promptly.   A quick question revealed that he as well as most of the other servers were Moroccan, not French..  I knew from watching “Casablanca”  that Morocco was a French colony at one time;  the sandwich was indeed delicious, with bread worthy of the French tradition.

On our last day we checked out of our hotel and headed for the taxi queue. A  woman driver saw us coming and jumped from her cab, grabbing our suitcases.  Ahead of her, another driver erupted from his taxi, accusing her of jumping the queue. She claimed we were on the street and fair game;  he rejoined that we were coming from the hotel, albeit from the side door, and as he was first in the queue we were rightfully his fare. We sided with the second driver and retrieved our suitcases. He was still fuming as we took off : “These new immigrants, they don’t know the rules.”  We asked “Where are you from?” “Ethiopia.”

So I didn’t meet up with any drug dealers, thieves, or murderers.  I did see a couple of people who were a bit rough around the edges in terms of conforming to our traditions.  But our stay would have been much less pleasant without the good service and friendly smiles of the immigrants we met, and I suspect our capital, like much of our nation, would grind to a halt without them.

One thought on “Immigrants in the Capital”