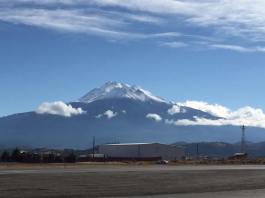 When I was growing up on the southern San Francisco peninsula,  smog was the norm.  Many a morning  as I walked to school, the air was so full of dirt that the foothills were invisible – I might as well have been living on the prairie.

Later when I was the age for making decisions about where to go to college, I was accepted at two excellent schools in southern California.  I visited both campuses and decided that it would be impossible for me to attend either – the air pollution was so severe that I could not go outside without suffering painful eye irritation with my contact lenses.

People depend on their cars.  How could we have a modern civilization with the flexibility and mobility we needed if we restricted auto travel? But how could we avoid strangling ourselves by breathing  our own waste?

Time passed.  Regulations and people demanded change.   Human ingenuity got to work.  Auto manufacturers learned to build more efficient cars which used less gas with no lead.  Petroleum plants learned to make gasoline which burned cleaner.   A problem which had seemed insoluble was nearly solved.  After a decade or so of effective regulation and innovation, the foothills reappeared.  When  I moved back to Los Altos after a ten year absence, I marveled at the consistent clarity of the air.

But this summer I have seen a huge relapse.  The air quality day after day has been miserable, due to the uncontrolled wildfires burning to the north and east, and the prevailing winds which suck the smoke down into the Santa Clara and Central Valleys.  My sister posted photos on Facebook from trips she had taken to Ashland, Oregon and back .  Three years ago her photo showed snow-topped Mt. Shasta dominating  the valley, as pristine as a Japanese print of Mt. Fuji.  This year, from the same vantage point, on the same calendar day, nothing was visible but a brownish smear of polluted air.

PG&E, among other entities affected, argues that the unusual severity of the fires is a result of global climate change, not human agency or corporate carelessness.  There are those who say that climate change is an act of God, beyond human repair. I believe, though, that God gave us brains and ingenuity in order to solve problems.  We have been able to shape our world in many ways to make it easier for us to live in it.  We have lowered the infant mortality rate.  Fewer women die in childbirth.  Smallpox, polio, and yellow fever have been conquered by vaccines.  We cleaned the air before.  With some inspiration and much determination I believe we can and must make the changes necessary to do it again.  I want my children and grandchildren to see our foothills.