Freeway Free in Colorado: The Other Side of the Rockies – Grand Lake

Most non-Coloradans probably think of Denver when they think of the Rockies – the wonderful postcard panorama of the city’s skyscrapers dwarfed by the huge mountain range rising abruptly out of the Great Plains. Some might think of the Air Force Academy in Colorado Springs, another tourist magnet.  If they get as far as Rocky Mountain National Park, most only  make it as far as the hiking trails around Bear Lake before turning back to Boulder or Ft. Collins or Colorado Springs or other east side centers.  But there is a lot to appreciate on the western slope of the Continental Divide.

We planned to eat lunch at the Trail Ridge Store at the Alpine Vistors’ Center, but we were delayed by road work as we slugged up and over the summit of the Continental Divide in Rocky Mountain National Park.  By the time we arrived, but the parking lot at  visitor’s center was full to over-flowing, and the  presiding ranger politely but firmly turned us away.  We coasted down the other side of the summit hoping at best for a coffee shop in Granby when my ravenous sister spotted a sigh for the Grand Lake Lodge – “Lodging/ Cocktails”. Where there is a bar, she reasoned, there must be bar food.  And thus we happened on  a hidden treasure on the west side of the divide.

The lodge itself is worthy of comparison to the great lodges of the National Parks such as the Ahwahnee at Yosemite and Old Faithful Inn at Yellowstone.  It is built of local timber, and features an expansive veranda billed as “Colorado’s Front Porch.”  The veranda looks out over the lodge pool and the Grand Lake – a spreading expanse of blue shining far below the deep veranda of the Lodge.

Inside is a huge gathering room, with quaint twig-and-slat rockers circled around a huge firepit.  Since the weather was excellent, we elected to eat on the porch with that great view, but we could imagine on a cold or wet day how comforting that fire would be. 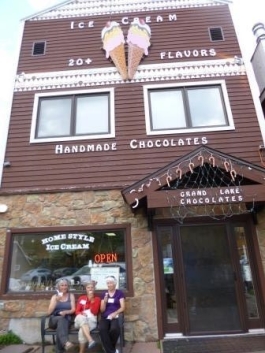 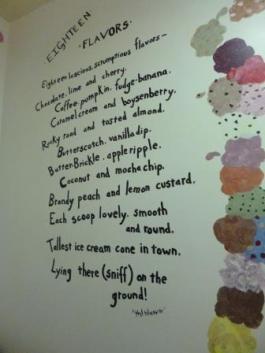 On separate trips to Grand Lake, we also discovered the eponymous town, a hyper-quaint log village beside the lake.  It boasts a wonderful ice cream shop (very welcome after hiking the nearby trails) as well as an informative museum of local history and an excellent repertory theater which offers three or four musicals rotating over the course of the summer, with cast members recruited from university theatre companies all over the country.  This summer we were there for “West Side Story” and lucked into Cabaret night, when the audience is invited to join the cast members after the show for some bonus music, each cast member presenting their own favorite song.  The performance is free, and the wine/beer bar is open.

2 thoughts on “Freeway Free in Colorado: The Other Side of the Rockies – Grand Lake”