Freeway Free in California: Beating the Heat in Ojai

If you want to exercise in Ojai in July you must be an early bird to beat the heat.  W and I rose before 7AM and went off to hike the Shelf Trail above the Ojai Valley.  The trail is about 3.4 miles out and back with lovely views across the valley of citrus and walnut orchards, and the town of Ojai spread out with its white Post Office bell tower anchoring the landscape.  By the time we turned around at about 8AM it was already hot, but we were walking west with the sun at our backs, and we went from one shade patch to the next until we regained our starting post. 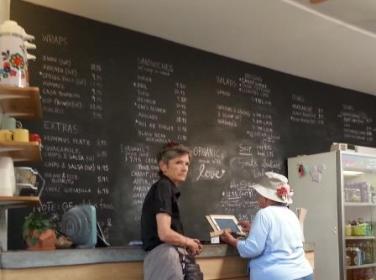 After breakfast we headed out to Carol Vesecky’s organic orchard, where she cultivates about 40 different varieties of fruit.  These included several varieties of mulberry, oranges, grapefruit, apples, figs, and several exotic south and Central American varieties that I did not recognize, though my companions who had spent time in South America greeted them like old friends.  After picking some mulberries (and eating half of what we harvested as it was picked) we headed for the Ojai Harvest, a well-reviewed organic restaurant in the heart of downtown, only to find it closed for the day.  Our Plan B was the Hip Vegan restaurant, where we had some rather exotic salads (mine was mixed greens, quinoa, marinated sea vegetables, carrots, avocado, and beets, with carrot-ginger dressing quite excellent).  [Note: per the linked news article, the Hip Vegan is in process of relocating to a fancier location – cross your fingers!]

We decided to beat the heat by browsing used book stores, the library , and the Ojai museum.  Bart’s Books is an amazing inside-outside rambling place, with bookshelves filled with overflow books facing the street’. If you walk by and see a book you want when they are closed, they have an honor box.  But the prices are a bit steep.

Next we parked near the arcade and browsed our way from one air conditioned art gallery or boutique to the next.  W is not a shopper, so she made a beeline for the drugstore and sat ona bench writing post cards while we other three did our explorations.  We rejoined for a visit to Twice-Sold Tales, another, much less pricey used book store run by the Ojai Library.  W excused herself against to write post cards in the library, while we browsed another bagful.

We checked in at the library, an old -style adobe and beam rambling building, then left W there, still writing, and continued to the Ojai Museum, located in a re-purposed church. My cousin, a long-time resident,  had never visited before, and found out quite a few things about Ojai that after 27 years of residence she had never learned. 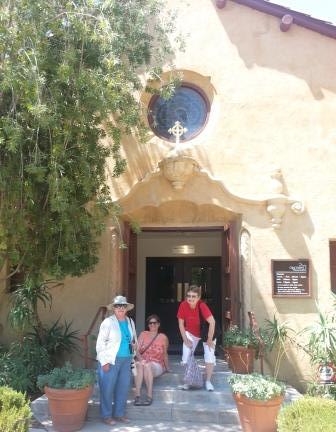 We took  my cousin out to dinner later  at an excellent Italian restaurant of her choice, Osteria Monte Grappa,  in the Arcade.  Delicious everything – I had spaghetti squash disguised as pasta with fresh tomatoes, basil arugula, prosciutto, and halibut.  By this time the heat had abated, but not so much that we did not enjoy bowls of gelato and sorbet after dinner!

One thought on “Freeway Free in California: Beating the Heat in Ojai”