Freeway Free in California: Off the Beaten Track in Ojai

Imagine if Walt Disney, instead of building Disneyland with his own profits from the Mickey Mouse Empire, had gone to the city fathers of Anaheim and asked them to go in with him in making Anaheim a really interesting place to visit (After all, it already had beautiful orange groves  and a scenic mountain backdrop.)  That’s kind of what happened at a crucial point in the history of Ojai, except the mogul who re-made Ojai was not Walt Disney, but Edward Libbey, the glass-making magnate.

Libbey was invited by a friend to spend some time at the Foothills Hotel  in the 1920’s and decided that Ojai, with its orange groves, beautiful mountain scenery, and gurgling creek, should be an artist colony and tourist destination equal to Santa Barbara directly to the west.  Just one problem:  the downtown area of Ojai was a make-shift kind of place, with wooden sidewalks, tacky false storefronts, and dirt roads.

But Libbey had a vision, and he must have been quite a salesman, as he succeeded on persuading the local Chamber of Commerce that Ojai could and should be transformed.  Santa Barbara and Santa Fe had succeeded in enforcing cosmetic building codes, Ojai also could transform itself into a California-mission-architecture oasis, drawing artists and tourists year-round with its sunny climate.

Some might have been daunted at prescribing mission architecture when in fact Ojai had nothing resembling a mission.  No problem.  Libbey engineered the building of a mission-style Post Office, complete with a four-story bell tower which chimed each quarter hour.  The false storefronts were replaced with cream-colored stucco and tile roofs; the wooden sidewalks were replaced with terra-cotta pavers and covered with arched arcades. Abracadabra! – Instant ambience!

It could have been a kitschy disaster.  But somehow it is not.  Almost a century has passed since Libbey had his vision, and with the passage of time Ojai has developed a patina of charm and tradition which seduces the visitor.  That bell tower IS charming to hear, those arcades ARE pleasant to stroll under, the central park IS a lovely shady place to enjoy a concert or a street fair,  the small shops, restaurants, and art galleries ARE worth a day of leisurely exploration.  And the mountains are still there.

One of the secrets to maintaining Ojai’s is that there are NO chain stores or restaurants allowed within the downtown center. If you go, stop at the Vons supermarket just outside the restricted area for weekend supplies.

The first night we went to a band concert in the park.  What could be more summery?  I felt as though I had stepped into “The Music Man” and Harold Hill would show up any second.  It was a perfect evening with a three-quarter moon growing brighter and brighter as the evening wore on.  A woman was selling balloons, some of which subsequently floated up into the overhanging oak to the accompaniment of wails from the child and cheers from the audience.

The band was a mixed group of kids and codgers, men and women, whites and people of color, all unified in white shirts and black pants. The concert began with a nonagenarian leading the group in the civic song, “Ojai, oh Ojai!” and continued with a succession of medleys – patriotic tunes, swing era tunes, Beatles tunes, John Williams movie themes.  (The advantage of a medley is that if the band messes up one tune, they have a chance to redeem themselves on the next.)

At intermission there was a balloon parade which circled the bandstand.  A visiting 12-year-old won a raffle and got to lead the band in the grand finale, “Stars and Stripes Forever”, preceded by the sonorous sounding of the 9PM hour by the Post Office bell tower across the way.  It was a rousing performanc by all.

I’d say Mr. Libbey got his money’s worth. 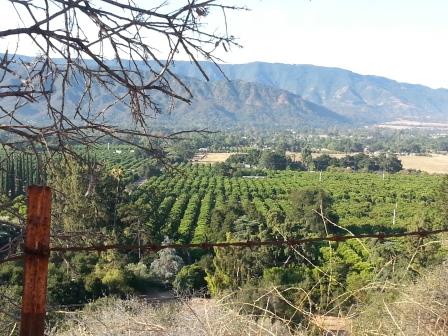 One thought on “Freeway Free in California: Off the Beaten Track in Ojai”