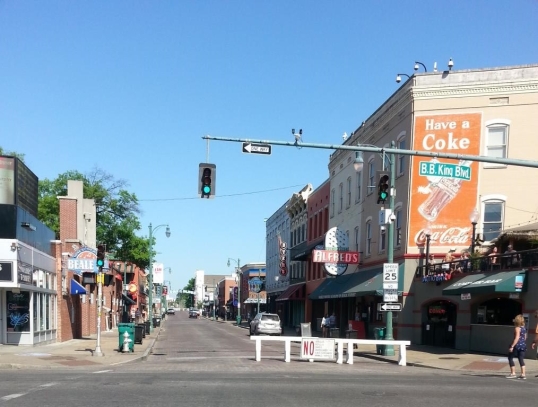 Yes, that’s Beale Street, home of the blues, looking pretty tame on a Friday afternoon.  But I am on my way to the Gibson guitar factory just a few blocks further down BB King Boulevard.  I know I am close when I see the iconic image on the corner. 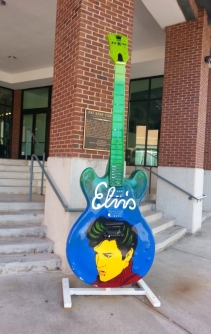 Inside I latch onto a tour just starting. The production line is almost empty of workers, as they are free to leave early on a Friday afternoon once their daily quota has been met.  When I say “production line”, I don’t want you thinking of whirring machines and automated conveyor belt.  Every step of construction of a Gibson guitar is meticulously done by hand, from pressing the contours of the belly to painting and lacquering the final finish.  The last two people, still at work, must have one of the coolest jobs in the world.  It is their responsibility to test each guitar once finished, to make sure it can riff, slide, and slither up to Gibson standards.

I’m not allowed to take pictures during the tour, but I spend a lot of time lingering in the attached store.  Some of the most beautiful instruments I’ve ever seen are here, and the clerk offers to take down any one I want to try.  I’m intimidated by the price tags though, and settle for a box of Gibson guitar picks. 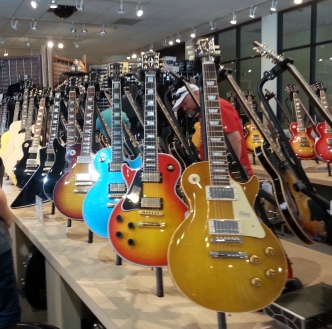 After the Gibson Guitar factory visit, I still have  some time, so I wander back up BB King Boulevard to Main Street.  I’ve always heard that the way to tell a real hick town is if the main street is actually called Main Street;  in this case it looks like Main Street probably used to be major, but is now in the process of cutesification, with  former dive bars metamorphosing into upscale restaurants, and former retail stores finding new lives as souvenir shops and museums.

One of these is the Center for Southern Folklore, which includes exhibits of folk art, a room where one can view videos and hear tapes of storytellers and singers, and in the evening offers performances by classic and not-so-classic musicians.  The night I was there featured a wonderful woman who took us through the history of the blues from gospel to Jerry Lee Lewis to Paul Simon.  You might be equally lucky. 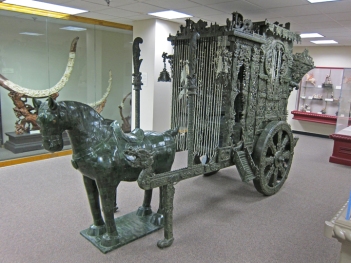 The CSF oddly shares space in the same building with the Belz Museum of Asian and Judaic Art. This basement space has an amazing collection of jade carvings, plus a room devoted to contemporary Judaic art, and a Holocaust memorial room. (Unfortunately, the website doesn’t display much of this richness, but if you google “Belz Museum” you will find a lot of pix)

In the evening, the cutesification of Main Street is completed by the arrival of several lighted coaches suitable for Cinderella.  They don’t seem to have much relation to historic Memphis, but they are awfully cute and provide a fantasy end to my informal tour.