Coastal vs Central California: It’s Still About the Water

Left side of the road 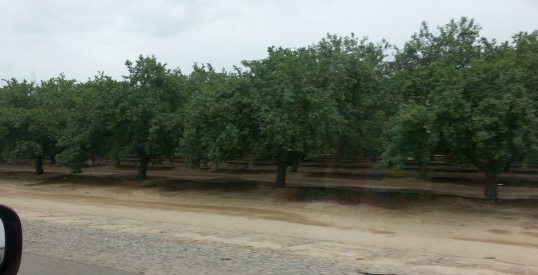 As far as the Pacheco Pass, the landscape was lyrically green with oaks and buckeyes sporting fresh foliage, and  wildflowers filling the crevices between the hills with streams of yellow mustard, buttercups,  and golden poppies. Rock outcroppings were wreathed in ribbons of late-rising fog like the karst peaks in traditional Chinese landscapes.

On the other side of the pass, we dropped down past the San Luis Reservoir, much healthier-looking at first glance than the last time we had passed this way almost two years ago. But a second look showed us the thirty  feet of rocky scree which separated the current level of the reservoir and the grassy level of the normal shore.  Despite heavy rain in March, the reservoir was still only at 52% capacity, 57% of the average fullness for the end of March.

Further down the hill, we began the long trek down the west side of the Central Valley on Interstate 5 . Except for irrigated fields and orchards, the green was gone – and the signs began.

On a barren field of scrub brush “Congress-Created Dust Bowl.” Next to an expanse of almond orchard, “Dams, Not Trains.” Several signs showing a perplexed looking boy and the query “Is Growing Food a Waste of Water?”  On the side of a truck parked next to the Interstate: “Politicians Created Water Crisis = Higher Food Costs, Lost Jobs.” The signs reflected the anger of farmers who had lost their historically unlimited water rights through recent  legislation.  No longer could they rely on digging ever deeper wells to enable cultivation of whatever they felt like growing.

More telling were the signs which began to appear further south: “For Sale – 100 Acres Almonds”.  Still more poignant were the dead orchards – acres of almond trees uprooted, some already brown and dead, some appearing to have been sacrificed only a short time ago.  We saw one backhoe in the process of destruction.  I took some pictures: on one side of the road were healthy almond orchards stretching off into the valley haze, irrigation hoses clearly visible.  On the other side: no hoses, no trees, no greenery, only scrub brush and bare dirt.

Almond trees are currently one of the most controversial crops of the Central Valley.   Almonds are a lucrative product, but they require a lot of water, and the largest percentage of the crop is grown for export to Asia, where demand is rapidly expanding.  With water increasingly scarce, it is argued, why should we allow irrigation of non-essential crops for export, rather than focusing on nutritional basics to be consumed locally?  But who or what will decide what is or is not “essential”?

With enlightened, long-term, apolitical water management, many well-tended farmhouses will survive.  But there will inevitably be many rotting bungalows amid the desert scrub. And fewer almonds in my Chinese chicken salad.