Disclaimer:  To get Perfect Days in Houston, it helps to  have a Knowledgeable Friend (KF) with a pied-a-terre smack in the center of town within walking or biking distance of the most beautiful neighborhoods, interesting locations, and good eats. Unseeasonably perfect weather helps also.  Of course, this is true of any city…

So, that condition satisfied – off we go!

Up, shower, tea, yogurt, on the bikes by 9:30 – to the Cafe Croissant- Brioche, home of excellent croissants almost up to Rue Cler standard. Lingered over cafe latte, then biked through the leafy lawny street of the Rice University neighborhood (the trees really do meet over the center of the street – though many died in last year’s drought) and along a bike trail through Hermann Park, into the Museum District. The Houston Fine Arts Museum spreads across several large buildings – we parked alongside a medical building and negotiated our way across the light rail line (much fancier cars than the SJLR), past the bag checkers, into a subterranean tunnel with a light sculpture effect which was quite magical (an optical illusion which created walls of color where none existed) and up and down and up until we reached the “Tutankhamun: the Golden King”  installation.

There were very few people on a Friday morning well into the exhibit’s run, so we saw everything at our leisure. The National Geographic (show organizer) made up in presentation what was lacking in content – Harrison Ford as narrator, a breathless Egypian archaeologist to comment in awestruck fashion on every artifact (“When I found this statue, I felt I was holding the universe in my hand.”), videos, photomurals, and special effects galore. But the golden guardians of the coffins, and the coffins themselves, were present only in pictures – I missed them.

Next, to the Museum’s Express Cafe, which like most Museum Cafes offered excellent Ladies Luncheon type food, but unlike most, offered it in Large Portions, so that we were obliged to leave a lot of King Tut’s Trio (an appetizer plate of Eastern Mediterranean dips and pita bread) behind.

Next to the Impressionist Gallery – a very competent collection of B pictures by every artist you ever heard of – refreshingly familiar after we had worked our brains being taught so much about King T.

Next to the Gift Shop, again like most Museum Gift Shops with a collection of interesting and expensive items more or less inspired by the art available, but since this is Texas, bigger and more. Friday afternoon is evidently Field Trip Day, and we arrived at the Gift Shop just as the kids did – the clerks were going quietly mad trying to keep track and keep order. I managed to get away with only a couple of post cards.

Back to the bikes, and off to the Hermann Park Rose Garden. Houston is ahead of Northern California in this respect and we saw a very respectable number of blooms.

Then to the small but interesting Weather Museum, where we learned more about hurricanes and tornados. I had seen a lot of information on the Great Storm which wiped out Galveston in 1900, but this museum filled us on on some of the other titanic storms since. (Sample trivia: Tropical Storm Allison is the only Tropical Storm to have its name retired due to its impact although it never reached hurricane force. The Houston Airport registered 37 inches of rain in three days.) Some bemoaning that the areas devastated by Ike didn’t get nearly the same degree of celebrity and other response that New Orleans got for Katrina – I remember towns in Mississippi made the same complaint. 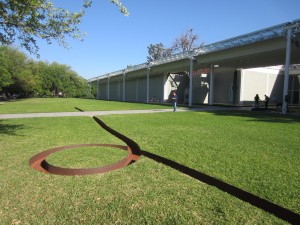 Then to the Menil Collection – an amazing private collection of modern art open to the public free of charge, hidden away in a Houston neighborhood near Rice, filling a large central  building plus a warehouse, two bungalows, and a few other out-buildings with modern art – lots of Magritte, some Braque, some Royko, and other artists too arcane and indecipherable to mention. The photo is  of one of the outdoor sculptures which reminded me of Stanford’s “Stone River” – a channel about 8 inches wide and 6 inches deep, lined in rusted steel, running across the lawn now straight, now curliqueing, now invisibly coming up into the air, then bouncing down again… oddly fascinating.

Dinner at a bustling seafood restaurant, Pappa’s Seafood Kitchen. I had spicy Crayfish Etouffe, KF had Texas Redfish, and we each brought enough home so that we did not have to cook the next day.