My father used to say “It only costs a little more to go First Class.” But that was back when a first-class upgrade set you back only about $20, and sometimes you could get one just by flirting with the ticket agent.

When I had a day job, I did quite a bit of international traveling in Business class and amassed enough Frequent Flyer points to gain access to United’s Red Carpet Club and other elite airport venues. More recently, I have had to join the hoi polloi in Coach class and in the ordinary waiting areas of airport terminals, so it was a real treat when we were upgraded to Business class on our flight to Great Britain.

The first surprise was our access to the Polaris Club Business Class lounge, which United now shares with Lufthansa and Continental. Wow! The old Red Carpet Club gave you coffee, tea, and pre-packaged cheese slices and crackers to tide you over while you waited for your flight. If you were lucky, they might not be out of apples or bananas. The Polaris Club is several levels of comfort and cuisine apart.

Not only are there espresso machines, but also several open bars with serve-yourself beer and wine as well as available mixed drinks. Food stations include German-style cold cuts and sausages for make-your-own sandwiches; a breakfast station with bagels, French pastries, hot and cold cereals, fruit, and yogurt; and a steam table offering hot miso soup, steamed rice, potstickers, ramen, and sushi.

Tucked away next to the restrooms and private laptop cubicles were showers! United has apparently picked up some classy tips from its European and Asian partners.

Once we were on board, we found seats that could be stretched out to lie flat, with pillows, blankets, big screens for on-screen movies, lots of storage for carryon luggage,  plugs for our laptops and Nicholas, an assiduous purser to answer any question. In Frankfurt the Polaris Lounge was equally well equipped as at SFO, and even on the small plane to Manchester we were served quite a creditable Salad Nicoise with wine. It’s been quite a while since I felt so pampered by an airline. A great start to our British adventure! 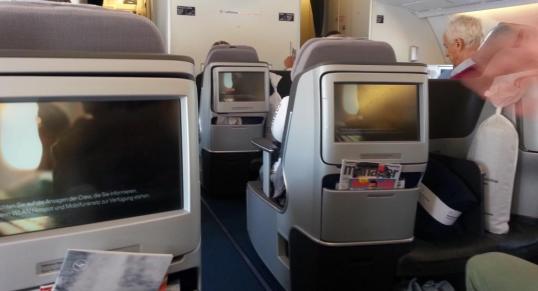 Next week: From Top of the Castle to Down in the Pits in Wales