Freeway Free in France: Rockin’ with the Romans

After our homage to Vincent, we switched back about two millenia to the time when Pompey was conquering the southern Mediterranean, just before he was recalled to Rome to help put down the slave rebellion led by Spartacus.  He helped establish the fort we visited yesterday at Ambrussum, but it was Augustus Caesar who visited a few assassinations and de-throneings later and established the Arena and the theatre, both of which are still in use.

We started off with a stop in the 12th century at the Cloistre de St. Trophies, a cool and calm spot right off the main square. The cloister included many  statues which had been so badly eroded you could hardly make them out, but a few that had been sheltered are very human and evocative.   Then we walked along the wall of the city overlooking the Rhone, well culverted against flooding, admiring an old Romanesque church which had been converted during the Revolution to a union hall for shepherds, a large domed building which was the remains of a steam bath built by Constantine, and a number of long views down the river to unnamed castles and fortifications in the distance.

The Arena was being set up for a cordillera that evening (that’s a kind of bloodless Provençal bullfight). In exploring the arcades,  we entered into a sort of human Whack-a-mole game.  DB had decided not to do the river walk but instead to meet us at a garden after our Arena visit.  C and I somehow got separated from WB, and we next spotted her halfway around the arena as we waved from the tower.  Ten minutes of brisk walking through the arcades later we arrived at where she had been, but no WB. 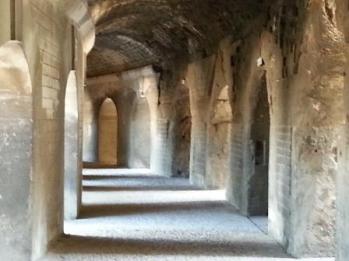 Scanning the arena, we spotted her in the Tower!  Heading back to the tower, I heard my name called.  It was DB, AWOL from the garden, who had just seen WB at the base of the tower.  “I’ll meet you at the entrance to the tower, ” she said.  By the time we got there, WB  was back a quarter of the way around the arena, and DB was nowhere to be seen.  And so on. We finally joined forces and made our last tourist stop at the old Roman theatre, much pillaged (as was the Arena) for building materials over the years, but now set up for open air musical and theatrical performances. We tested the acoustics and found them sadly lacking compared to Ephesus in Turkey or the Mormon Tabernacle in Salt Lake City. 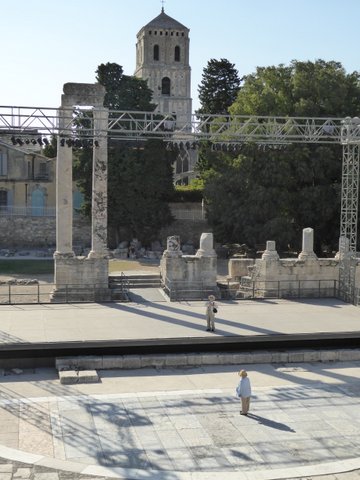 Travel Tip:  Arles is a busy city as well as a tourist stop.  It is also home to many festivals throughout the year, attracting still more people.  If you are arriving by car, try to get there early in the day, and find a parking place by going off the main road through the center city (Preferably downhill – you’ll appreciate that after exploring all day!)  Once you have a parking place, the next stop could be the Office de Tourisme de Arles, conveniently located on the Blvd. des Lices, near the Theatre Antique. Here you will find excellent maps of the center city, friendly advice about getting around, and zillions of beautiful postcards.  Enjoy!

4 thoughts on “Freeway Free in France: Rockin’ with the Romans”